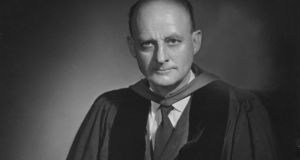 Reinhold Niebuhr: warned that “religion is so frequently a source of confusion in political life, and so frequently dangerous to democracy, precisely because it introduces absolutes into the realm of relative values”. Photograph: Bachrach/Getty Images

Anybody following the recent US presidential campaign will know that religious views played a significant role, with lots of attention focused on the white evangelical Christians who supported the non-church going Donald Trump and rejected the devout Joe Biden, who made clear what his faith meant to him.

The evangelicals were not alone in their support for Trump. In a Rite & Reason column in this newspaper (October 27th), Fr Patrick Hannon, emeritus professor of moral theology in Maynooth, wrote about the challenges facing a Catholic politician like Biden in America, trying to balance competing views of church and civil society on moral issues. He noted that in the recent election campaign, Cardinal Dolan of New York had signalled his support for Donald Trump because of his pro-life agenda.

It is clear that Trump’s support among the religious extends beyond evangelical fundamentalists. Indeed, after the 2016 election, the National Catholic Reporter, an American journal, reported that the 81 per cent of white, “born again” evangelical Christians who voted for Trump were joined by 58 per cent of mainline Protestants and 52 per cent of Roman Catholics. They backed Trump because he was willing to meet their demands on moral issues.

That religious/political alliance brought to mind the writings of the Rev Reinhold Niebuhr (1892 -1971), considered in his time to be one of America’s leading intellectuals. The historian Arthur Schlesinger jnr described him as “the most influential American theologian of the 20th century”.

The son of a clergyman, Niebuhr was a pastor in the American branch of the German Evangelical Church, now known as the United Church of Christ, as well as being a leading academic.

He took particular interest in the relationship between religion and politics, believing that religion could be a source of error as well as truth and therefore its role should be to cultivate a sense of humility rather than a sense of infallibility. He said that “religion is so frequently a source of confusion in political life, and so frequently dangerous to democracy, precisely because it introduces absolutes into the realm of relative values”.

In his book The Irony of American History, Niebuhr wrote: “We . . . as all ‘God-fearing’ men of all ages, are never safe against the temptation of claiming God too simply as the sanctifier of whatever we most fervently desire. Even the most ‘Christian’ civilisation and even the most pious church must be reminded that the true God can be known only where there is some awareness of a contradiction between divine and human purposes, even on the highest level of human aspirations.”

That temptation to see “God . . . as the sanctifier of whatever we most fervently desire” may be attractive to those who long for certainty and seek to dominate others but it is not consistent with the teaching of Jesus who stood up to the absolutists of his day (The Pharisees) and told his followers to prepare for change: “When the Spirit of truth comes, he will guide you into all truth.”

The Christian life requires change, as new truths consistent with the mind of Christ are revealed.

Reinhold Niebuhr may not be widely remembered but his words are, for he is the author of the Serenity Prayer which first appeared in a sermon of his which was included in A Book of Prayers and Services for the US armed forces during the second World War. It speaks well to our fears in these troubling and challenging times.

“God grant me the serenity to accept the things I cannot change; the courage to change the things I can; and the wisdom to know the difference. Living one day at a time; enjoying one moment at a time; accepting hardships as the pathway to peace; taking, as He (Jesus) did, this sinful world as it is, not as I would have it; trusting that He will make all things right if I surrender to His Will; that I may be reasonably happy in this life and supremely happy with Him forever in the next.”