Just 40% of renters can afford to regularly save money

Debt should be seen as ‘a national policy’ rather than ‘an issue of blame’, says Tasc report 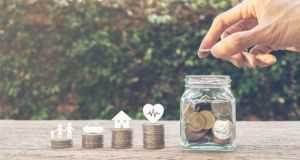 Private sector renters are almost four times as likely to be unable to pay for heating, while 28 per cent have faced arrears in utility bills, the report says.

Unmanageable household debt should not be seen as simple “individual failing” but as a reflection of economic and political factors affecting thousands of people, a new report argues.

Exploring Household Debt in Ireland, published on Wednesday by the social change think-tank Tasc, says those who fall into debt often do so through funding basic needs, not extravagant lifestyles.

It points out that private sector renters are almost four times as likely to be unable to pay for heating, while 28 per cent have faced arrears in utility bills.

Just 40 per cent of people renting privately can afford to regularly save money, it says, while exactly one third of those in debt are over-burdened by repayments.

Those statistics, drawn from the 2017 EU Survey on Income and Living Conditions, are used to support the report’s overall argument that more needs to be done to train people in financial management, alongside a healthier overall understanding of why people find themselves in difficulty.

“A large number of people in Ireland are living without financial security,” said the report’s author Amie Lajoie.

“If they lose their job, or if they have to deal with an unforeseen issue, they are unable to cope. This is a very precarious situation, not just for individuals and families, but for the economy.

“We have to change the way we regard dangerous over-indebtedness - to shift it from being an issue of blame or solely personal responsibility to a national policy issue.”

Tasc is to begin a pilot programme in Dublin’s north inner city, providing individuals with “intensive and personalised” training on financial resilience and capability, designed as a pre-emptive approach to debt.

It says household debt in Ireland was €137.5 billion in 2018 with many struggling with the rate of repayments.

The proportion of those who feel overburdened by debt varies from one section of society to another - 22 per cent generally, rising to 32 per cent in low income households, according to the same EU data.

The report also reemphasises the issue of access to credit - over 350,000 households borrowed from moneylenders in 2017, with the most common interest rate set at 125 per cent.

“[Personalised financial risk] is storing up real difficulties if the economy goes into a recession or if there is an external economic shock,” Ms Lajoie said.