‘Our children need us’: Charity calls for public help as it aims to raise €80,000 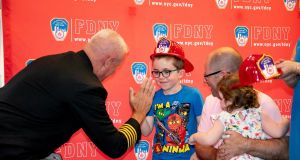 Cormac Kennedy (7) from Bagenalstown, Co Carlow, was made an honorary firefighter in New York city

Make-A-Wish Ireland, which grants wishes to children living with life-threatening illnesses, has had to cancel its on-street collections due to take place around the country on Friday due to concerns about the spread of coronavirus.

The charity grants approximately 200 wishes per year to children living with illnesses such as cancer, cystic fibrosis and heart conditions.

Speaking to The Irish Times, the charity’s chief executive Susan O’Dwyer explained the work that goes into the wish-granting process. When a child has been deemed eligible by their consultant, two volunteers meet the child to “basically build a database of knowledge that will enhance the wish- including their favourite music, food, drinks, who they love spending time with... It has to all be about the child. If their favourite drink is sparkling water, that’s all that will be in the limo or at the venue,” she said.

“We then send the details of the wish to the child’s consultant to deem whether they’re physically able - that could be in relation to the length of time the child is on oxygen or there could be a procedure coming up that might clash with when the wish is planned. Once we get the go-ahead, he wish-granting team get cracking.”

Ms O’Dwyer said all of the charity’s work depends on fundraising avenues, “such as communities getting involved, organizing cake sales, taking part in a marathon, and our national Wish Day”.

She said: “Our children need us. We often hear from siblings to say they saw mum and dad smile again for the first time, or families say they finally felt normal and forgot about the trauma of the illness or the hospital visits. In some cases, some of our children do pass away but what we’ve heard from those parents is that the impact of the wish and the memories from it will never leave them.”

Louise Walsh has granted over 300 wishes in the past five years. Though she says the wishes are “only limited by the imagination of the child”, a lot of planning is involved.

“Some of our families wouldn’t have been on holidays or on a plane because they’re too nervous. We take all the stress away and so we organise everything for them. So when they arrive they’d have drip stands, oxygen, a hospital bed if needed. We have robust travel insurance in place too,” said Ms Walsh.

Cormac Kennedy (7) from Bagenalstown, Co Carlow, was diagnosed with an optic glioma on his fourth birthday. “When we went to do the wish visit, all Cormac had on his iPad was footage from the fire departments in New York and Chicago. So there was no doubt about what his one true wish was,” said Ms Walsh.

Cormac travelled with his parents Helena and Eoin, and sister Ailbhe, to a New York fire station last August. New York City Fire Department commissioner Daniel A Nigro was present at Cormac’s swearing-in as an honorary firefighter. Cormac was shown the fire engines and presented with his own uniform.

Cormac’s father, Eoin Kennedy, said: “After all we’ve been through, it was great to see Cormac be able to to go away and forget. Cormac is blind in one eye from chemotherapy and partially blind in the other so he may never be a fireman. But this is a memory that will stick with him forever and without Make-A-Wish he would never have had that. He still tells everybody about his trip.”

Ms O’Dwyer said: “As we receive no government funding, we rely entirely on the generosity of the general public. Wish Day is our first large fundraising campaign of the year and the decision taken to cancel on-street collections has not been taken lightly. However, we have a duty of care not only to our wish families, who are so vulnerable but also to our volunteers and the general public.”

She said: “We have a target of €80,000. So we are urging the public to look at other ways they can support is - they could set up a Facebook fundraiser or donate online on our website. They could pop into their local Spar, we get some donations from their own brand products and they’re selling a pen for us at a cost of €2.”