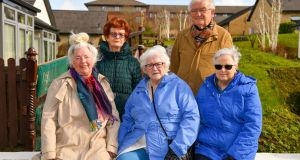 Elderly and disabled residents of a Limerick retirement village say new owners have removed services, increased rents and issued some with tenancy-termination notices.

They fear management at The Park village in Castletroy plans to change the complex, which opened in 2008 and has 140 households, into a housing estate. Written requests, signed by more than 70 residents, to meet the new owners have not been responded to, they say.

The brochure for prospective tenants said rent would include an on-site caretaker, refuse disposal, an emergency medical call system and use of clubhouse and its facilities. Rents were set at €850-€1,100 a month.

When Fordmount went into receivership in 2009, its loans were taken over by Nama. The agency sold the Fordmount loans associated with The Park to Cereberus (Promontoria) in 2017.

Of the 140 dwellings, 119 – as well as the grounds and recreation rooms – were sold in August 2019 for €6.85 million, according to the Property Services Regulatory Authority. The new owners are Limerick couple Edel and Séamus Madden.

All chose the village for its services and location, close to public transport and the Castletroy Park Hotel and leisure club.

Among the attractions were the daily activities in the clubhouse such as yoga, zumba and art classes, along with coffee and scones each morning. A weekly refuse collection from the residents’ front doors was included.

“I came understanding I could live independently and also the services were excellent,” says Ms Cichorrz.

Since October, however, things have changed, the residents say. The coffee and scones are no more and activities have been withdrawn. Tenants were told in December the “practice of leaving refuse outside doors and in corridors needs to cease” and residents must carry their rubbish to heavy-lidded dumpsters at the back of the complex. Some frail residents find this very arduous, according to Sr Moloney.

Two residents, including Ms Lynam, have been issued with notices to quit (NTQ). The owners say they intend to “substantially refurbish” their houses.

“I was in such shock. I still am not right,” Ms Lynam said. Though she has been offered an apartment or a different house instead, she said her house of 10 years was her home. “I am devastated.”

She, the other resident issued with an NTQ, and five residents issued with rent increases of up to 10 per cent, have cases before the Residential Tenancies Board and await its recommendations.

One of the houses, which had served as a reception, is now occupied by four young men employed by a local IT company.

No new elderly people have moved in since last summer, the residents say, while the original website for The Park, which had outlined its attractions for elderly and disabled people, has been taken down, with the promise of a “new website coming soon”.

Dr Ryan called a residents’ meeting in the clubhouse last week to discuss concerns. It was attended by a representative of the Diocese of Limerick as three elderly priests are among the residents.

On Friday evening Dr Ryan received a letter, signed by Ms Madden, telling him he had held the meeting despite her instructions not to do so.

“Should you ever do it again, legal action will follow. In addition, you should be aware that we are currently reviewing the full implications of your actions and the consequences may indeed impact on your tenancy.”

Limerick City Council told The Irish Times its planning enforcement section was “aware of concerns” and had “issued a warning letter” to the new owners.

“We will meet with the residents to determine the full facts and to advise them as to what action if any can be taken by the council.”

Neither owners nor management of The Park retirement village returned phone messages, email or a message left in person, from The Irish Times.

Dominic Cummings says he does not ‘regret’ actions and behaved ‘legally’

1 Dominic Cummings says he does not ‘regret’ actions and behaved ‘legally’
2 Coronavirus: What will reopen in Ireland’s phases to ease restrictions and what are the dates?
3 Coronavirus: Numbers receiving pandemic payment falls as thousands return to work
4 Unidentified man has been in Irish psychiatric hospital for 30 years
5 Pricewatch: Left on the shelf - what we are no longer buying
Real news has value SUBSCRIBE