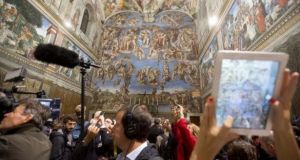 An interior view of the Sistine Chapel

A random act of kindness, a glass of water given out of goodness, seems like a very low threshold for eternal redemption.

Christianity has always placed a strong emphasis on Christ’s humanity; he was like us in every way except that he did not sin. Although we will portray him returning in a regal court this weekend, his judgments are not like our ones either. Jesus seeks good among the ordinary and the bad alike; humanity seeks bad among the ordinary and the good alike. For Jesus, the sinner who performs a single act in kindness can be saved. For the rest of us, the saint that did something wrong is blemished forever.

There is no doubt that the Gospels record him as telling us that we could retain sins. Although he never needed to do this himself, we are good at retaining sins.

His hands stretched out in forgiveness to those who had nailed them down. Ours stretch out to point in criticism at the wrongdoer. Maybe he isn’t so like us at all?

It is hard to imagine the last judgement taking place in any context other than in a human court.

We have a very dominant image of what a judge is like and how a judge should behave. It is not surprising that the image of Jesus as a fair but uncompromising judge is deeply set with many Christians. There are even some who delight in the idea of bad people getting their just deserts.

“Vengeance is mine,” said the Lord. The tradition has been to represent Christ coming in majesty and power. From Michelangelo’s ceiling of the Sistine Chapel to the studios of Breughel, Blake and Bosch, that image is by far the most common in western art. It hogs our imagination with its repetitive presence. It is familiar because it is like what we do in every way, except that we don’t forgive. The bulk of our artwork includes tormented souls being dragged off to eternal punishment. That also has a sad familiarity. It is likely that almost all of us have an idea of some of the people who should be in that category.

There have been other portrayals. In the 1970s musical Godspell, Stephen Schwartz recreated that judgment scene. Only, Jesus has second thoughts and brings the damned along too. They had sung a song asking for mercy and they received it. That is an image which is very much in keeping with the words: “Judge not and you will not be judged. Condemn not and you will not be condemned. Forgive and you will be forgiven.”

There are higher standards of forgiveness to which humans aspire. We touch on them at times of death. We can find redeeming qualities in the worst of people when preparing their funeral services. We are well capable of looking beyond the faults of people we know and love when others criticise them. Individually, we even ponder the failure of those around us who do not appreciate our redeeming characteristics. That makes us a bit like Jesus.

Maybe it should be that we should be more like him in every way except for our occasional sin!