Almost 40,000 social homes could be built by local authorities 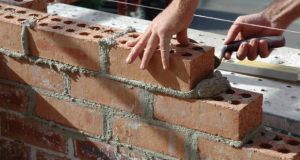 In Dublin city, where there are 120.6 hectares of local authority-owned land, some 12,017 homes could be built, according to housing policy analyst Mel Reynolds. Photograph: Getty Images

Local authorities could directly build almost 40,000 new social dwellings on their own land – three times as many as are planned under the Government’s Rebuilding Ireland strategy, new figures show.

The data, from housing policy analyst Mel Reynolds, show the 31 local authorities own about 700 sites, or 1,211 hectares of land which is undeveloped and zoned for residential development. On the lands, some 37,950 dwellings could be built.

The Government’s Rebuilding Ireland (RI) strategy, however, sets a target of just 13,189 social housing homes to be directly built by local authorities between last year and 2021.

From January 2016 to the end of June, 459 social dwellings have been built by local authorities – just 3.5 per cent of the RI target.

In Dublin city, where there are 120.6 hectares of local authority-owned land, some 12,017 homes could be built, according to Mr Reynolds.

Under the Housing Land Initiative, part of the RI strategy and which is being implemented across three large local authority-owned sites in Dublin as a model for more sites, just 30 per cent of housing on publicly owned land is to be social housing.

It is likely as few as 4,000 social homes will be delivered in Dublin city by 2021. The council has a housing waiting list of more than 20,000 households.

In Cork county, there are 89.3 hectares which could accommodate 1,573 homes, while in Fingal there are 89 hectares (with a higher population density), potentially accommodating 2,766 households.

Mr Reynolds has drawn on the Residential Land Availability Survey, published by the Department of Housing and the Rebuilding Ireland housing land map, both available online.

Other figures, also collated by Mr Reynolds, indicate how far behind RI is on its social housing targets.

At the current rate of provision since January 2016, just 35 per cent of targets have been achieved, resulting in a projected shortfall of 20,497 units by the end of 2021 “unless delivery is stepped up really dramatically”, says Mr Reynolds.

However, data provided by the Department of Housing to Sinn Féin housing spokesman Eoin Ó Broin shows the department’s targets.

Under Part 5 a builder must make available at least 10 per cent of dwellings on a development to the local authority at a reduced rate.

And just 137 have been delivered under Part 5, averaging 96 per annum, or 3.7 per cent of the target set by the department.