The faith of Ireland’s Catholics continues, despite all

What sort of country will Pope Francis encounter? One where Mass attendance – though falling – is still among the highest in Europe, where scandals have dented people’s faith in the church, but faith itself has not died 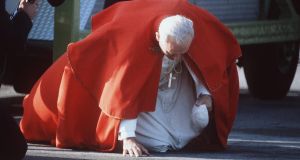 Watching the second part of the quite superb RTÉ documentary series The Game last Monday night, I was struck by the fervour of the crowds in Croke Park at All Ireland hurling finals in the past, as they sang that battle-hymn of Irish Catholicism, Faith of Our Fathers: “Faith of our fathers, living still/ In spite of dungeon, fire, and sword.”

Many understood it then as a reference to the survival of the Catholic faith in Ireland, despite persecution and the Penal Laws. In fact, Faith of Our Fathers was written to commemorate those Catholics executed as traitors in post-Reformation England. No matter, it fitted the bill where Irish Catholics of the middle 20th century were concerned. It was how they saw themselves and their church: triumphant and free at last after centuries of oppression.

Many would now see that Ireland of Faith of Our Fathers, with its black and white images and realities, as such a foreign country. And it is.

In that “heyday”, more than 93 per cent of Irish Catholics attended weekly Mass, the special position of the Catholic Church was recognised in the Constitution, and divorce and artificial contraception were outlawed.

It was also producing so many priests and nuns that between a third and a half went on “the missions”. This moved Pope John XXIII to write in 1961 to Ireland’s then Catholic Primate Cardinal John D’Alton, saying that “any Christian country will produce a greater or lesser number of priests. But Ireland, that beloved country, is the most fruitful of mothers in this respect.”

Faith of Our Fathers was written in 1849 by Englishman Fr Frederick Faber. In this post-Famine Ireland, there were few priests, few Catholic Church buildings or primary schools, and the church had little influence on day-to-day life. That would change in 1850 with the appointment of Paul Cullen as Archbishop of Armagh and his translation, to use the Church term, to Dublin in 1852.

What we are witnessing is the death of a model of the Catholic Church in Ireland, not of Catholicism itself

This extraordinary man was architect of the heavily-clericalised Irish Catholic Church we have known. He centralised its authority and structures, bound it to Rome, introduced processions, Benediction, retreats and devotions, and encouraged the building of schools and hospitals managed by priests and Catholic religious congregations.

He laid powerful foundations for a Catholic Church that dominated Ireland through the 20th century.

Today it is in steep decline. The most powerful indicator may be that the average age of the Irish Catholic priest today is 70, while just six men began training for the priesthood in Maynooth last autumn – the lowest number since its foundation in 1795.

According to Association of Catholic Priests figures, their number in active ministry has dropped by 43 per cent since 1995. Association co-founder Fr Brendan Hoban has said that “Ireland’s priests will have almost disappeared in 20 years”.

But what we are witnessing is the death of a model of the Catholic Church in Ireland, not of Catholicism itself.

If the Irish Catholic Church was so culpable in betraying its people, just as culpable was Rome

Christianity has been in Ireland for over 1,500 years; the Church that Paul Cullen built lasted one tenth of that time, about 150 years. And it’s goodbye to all that. It was not a pretty church. It became dominant, arrogant, abusive. It betrayed its teaching and the people, abused their children, and facilitated that abuse through covering it up to protect itself.

This was as concluded by Ms Justice Yvonne Murphy in her 2009 report on the handling of clerical child sexual abuse in Dublin’s Catholic Archdiocese.

The priorities of the Archdiocese in dealing with clerical child abuse, she found, were “the maintenance of secrecy, the avoidance of scandal, the protection of the reputation of the Church, and the preservation of its assets. All other considerations, including the welfare of children and justice for victims, were subordinated to these priorities. The Archdiocese did not implement its own canon law rules and did its best to avoid any application of the law of the State.”

This was a template for what would emerge from other Irish dioceses and Catholic institutions in further such State reports. Probably worst of all, Justice Murphy found that “the welfare of children, which should have been the first priority, was not even a factor to be considered in the early stages”.

But if the Irish Catholic Church was so culpable in betraying its people, just as culpable was Rome. This was underscored in the past week with revelations from a meeting between former president Mary McAleese and then Vatican secretary of State Cardinal Angelo Sodano in 2003.

He initiated a discussion with her about an agreement between Ireland and Rome under which Rome would have control over all church documents in Ireland and at the Vatican. Mrs McAleese ended the discussion, pronto.

A year later Cardinal Sodano went further. He proposed to then minister for foreign affairs Dermot Ahern at the Vatican that the Irish taxpayer should pick up the bill for compensation paid to survivors of abuse by Catholic priests in Ireland. That conversation, too, ended abruptly.

And all of this from a Rome which refused to co-operate with Irish State inquiries into the handling of clerical child sex abuse in two Irish dioceses from which it had received details of such abuse in 2001. That was at the direction of then Dean of the Congregation of the Doctrine of the Faith Cardinal Joseph Ratzinger, later Pope Benedict XVI.

He instructed every Catholic bishop in the world to forward such details to him, and they did. He was pope when the Commission investigating Dublin and then Cloyne dioceses in Ireland was looking for those documents and was ignored.

Despite which he felt free, in his letter to Irish Catholics of March 2010, to excoriate Ireland’s Catholic bishops for covering-up clerical child sex abuse.

It was after publication of the Cloyne report in July 2011 that then taoiseach Enda Kenny made one of the most damning Church-related Dáil addresses ever delivered.

He said the Cloyne report exposed “an attempt by the Holy See, to frustrate an inquiry in a sovereign, democratic republic.”

He continued: “Far from listening to evidence of humiliation and betrayal . . . the Vatican’s reaction was to parse and analyse it with the gimlet eye of a canon lawyer . . . This calculated, withering position being the polar opposite of the radicalism, humility and compassion upon which the Roman Church was founded.” Ireland’s embassy to the Holy See was closed in November that year.

That was then. The Embassy has since reopened, and relations between Ireland and the Vatican have improved greatly. Despite the betrayals mentioned above, an exceptional number of Irish Catholics still hold on to their faith – even if they have little trust in the institution anymore.

The 2016 census in Ireland found that 78.3 per cent of the population still identified as Roman Catholic.

A European Social Survey of 18 countries that year, and published last November, showed that weekly Mass attendance by Irish Catholics remained high by European standards. It found that 36 per cent of Irish adults attended a religious service at least once a week. The average weekly attendance for the 18 European countries surveyed was 12.8 per cent.

That survey also found the number of Irish people who pray at least once a week was 55.3 per cent, while the average for the 18 countries was 30 per cent.

It found that Ireland’s least religious age group, those aged 16 to 29, were more likely to practise their religion than almost any of their peers in Europe. Of those young Irish, 54 per cent identify as Catholic, 24 per cent attend church weekly outside of special occasions, and 43 per cent pray weekly.

Only their peers in Poland (47 per cent) and Portugal (27 per cent) have a higher weekly Mass attendance.

What all of this indicates is the continuing importance of faith to the Irish people, despite persecution in the past and shocking betrayal by in more recent times.

Where this faith continues to be most manifest is in the deep, sustained, compassion of the Irish people. A perfect illustration is their ongoing support for causes such as the Catholic bishops’ overseas development agency Trócaire. Last year it raised €29.1 million, an increase of €12 million on the previous year and the second-highest amount received in the agency’s 45-year history.

Irish Catholics remain faithful, generous and compassionate, despite all. It is because of such compassion they voted so overwhelmingly for same-sex marriage in 2015 and to remove the Eighth Amendment last May.

It is arguably recognition of a similar trait of compassion in Pope Francis that meant they booked out his planned Knock appearance on August 26th within hours.

After all that has happened, perhaps the only question outstanding is whether the Church deserves Ireland’s Catholics or their loyalty.