Margaret Cash and six of her children - aged between one and 11 - stayed at Tallaght Garda station after emergency homeless services were unable to find beds for them. 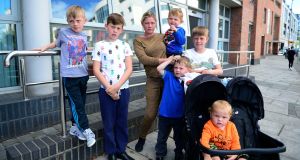 Families living in emergency accommodation in the Dublin region may be forced outside the capital during the papal visit.

The Dublin Region Homeless Executive (DRHE) said contingency plans are in place for Pope Francis’s visit at the end of the month and that it may involve taking people out of “pressure points”.

The DRHE is currently reviewing processes in place for those who present late at night in need of emergency accommodation after Margaret Cash, a homeless mother, and six of her seven children had to stay in Tallaght Garda station on Wednesday night.

Eileen Gleeson, director of the DRHE, said the upcoming papal visit “may involve us having to take people and put them in accommodation outside of the pressure points and move them to outside of the Dublin region”.

“If that’s what’s required, that’s what we will do and we have a plan in place to do that,” she said.

“The papal visit in my understanding is 36 hours, so it’s one night in a hotel room.”

Ms Gleeson maintained there was no need for any family seeking emergency accommodation to spend the night in a Garda station.

Some 48 families spent the night in Garda stations last month, he said, and 47 the month before that. He described plans to move people living in emergency accommodation outside the capital during the papal visit as “treating people as if they’re cattle”.

The Department of Housing said the Minister for Housing, Eoghan Murphy, spoke with the DRHE, who confirmed they were reviewing processes in place for those who present late at night in need of emergency accommodation.

“Emergency accommodation was available last night but there is clearly urgent need for better communication between the DRHE, our partner organisations and State agencies to ensure families can be accommodated at short notice when they present,” it said in a statement.

The DRHE said it is not policy to refer families to Garda stations but that if accommodation cannot be sourced late at night, after all contingency capacity has been utilised, families are at times referred to stations by Focus Ireland for their safety and while efforts to source emergency accommodation continue.

Ms Cash and her family were on Thursday night provided with temporary accommodation by the ICHH group, and now have somewhere to stay until Monday.