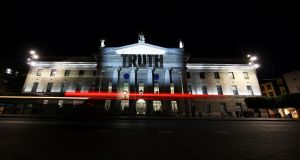 The word ‘truth is projected on the GPO in Dublin as part of a protest ahead of the visit by Pope Francis. Photograph: Reuters/Hannah McKay 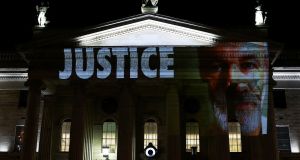 Projections showing victims of clerical abuse are seen on the GPO in Dublin on Friday evening as part of a protest ahead of the visit by Pope Francis. Reuters/Hannah McKay 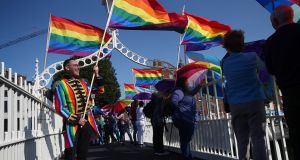 One of a number of protests against clerical child sexual abuse took place near Dublin Castle on Saturday morning.

The protest was organised by Margaret McGuckan, a survivor of historic child abuse who spent years in the Nazareth House children’s home and helped campaign for the introduction of the Historical Institutional Abuse inquiry.

Ms McGuckan said the protest was a symbolic gesture to the pope and the church that victims had not gone away.

She said: “The pope now needs to stand up to the plate and do something for the survivors. We need redress, we need the church held to account.

“It’s not just Ireland, look what has happened in America, people fall away from the church because they don’t practice what they preach.”

During her time in Nazareth House, Ms McGuckan says she was beaten, starved, neglected, emotionally, physically and mentally abused at the hands of nuns charged with her care.

Banners were unfurled at Dublin’s Dame Street demanding redress for victims and an end to what they see as a papal cover-up.

Many at the protest were from the global survivors network End Clergy Abuse who had baby shoes tied around their neck in protest for the children who died in the Mother and Baby Homes across Ireland.

Pete Saunders, a survivor who was abused in Jesuit school in London, travelled from England’s capital to attend the protest.

Another protest took place on the Ha’penny Bridge over the River Liffey in central Dublin this morning as the plane carrying the pope touched down.

Blue ribbons were tied to railings in support of abuse survivors, rainbow flags waved in solidarity with LGBT people and purple umbrellas held in support of the ordination of female priests.

Mininster for Health Simon Harris said it would be a weekend of mixed emotions.

On Friday night, images of clerical abuse survivors and activists were projected onto buildings across Dublin city on Friday night ahead of the papal visit.

Images of Mary Raftery, Marie Collins, Christine Buckley, Colm O’Gorman and Andrew Madden have been projected onto buildings including the GPO, Dublin’s Catholic Pro Cathedral and the Department of Education and Skills.

Organisers said the illuminations were a celebration of the “activists who were the first to speak out about abuse and shame, at a time when it was not safe to do so, and who brought to light, for the first time, the horrors inflicted by the Catholic Church on so many people in Ireland”.

The projections were organised as part of the ‘Stand for Truth’ event taking place on Sunday at 2.30pm at the Garden of Remembrance.

The event is “for everyone who has been harmed or abused by the institutional Roman Catholic Church, or who wishes to stand in solidarity with those harmed by its actions,” a statement on behalf of its organisers said.

Speaking ahead of the event, organiser Colm O’Gorman said: “We cannot stand by as the scale of the harm caused to countless children, women and vulnerable adults is dismissed or diminished.

“We are better than that. We will not allow the victims of the church’s brutal history to be marginalised...This week Pope Francis has begged for forgiveness, but it isn’t at all clear what he wants forgiveness for.” - Additional reporting PA