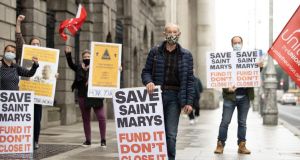 Protesters for the Campaign to save St Mary’s Nursing Home on Merrion Road outside the High Court. File photograph: Tom Honan/The Irish Times.

Joe Brabazon (83) has never received such a shock. His wife Kay (81), who suffers with Alzheimer’s disease,was in St Mary’s nursing home on Dublin’s Merrion Rd for almost 12 months when he was told it was to close and she had to be moved.

“I was completely shocked. I just couldn’t get over it. It was a terrible thing to happen. I was disgusted.”

Last month the Sisters of Charity-owned home was placed in liquidation. So too was another of their nursing homes, St Monica’s at Belvedere Place in Dublin city centre, as was Caritas, a convalescent home of their’s located beside St Mary’s.

Caritas was closed last March. At that time two of its 64 staff were confirmed to have contracted Covid-19 and it was felt uneconomical for it to provide facilities there which met socially-distanced requirements.

St Monica’s had capacity for 46 residents with more than 60 employees while St Mary’s had 60 staff and 35 female residents, whose families were informed on June 3rd it would close by the end of the year.

The decision to appoint liquidators last month and close the homes took staff, as well as residents, and relatives of residents, by surprise.

The Health Service Executive also said it was surprised. It was involved in discussions around “financial and infrastructural challenges at St Mary’s” when the centre announced it would close, said a spokeswoman.

Further meetings “were planned when the HSE became aware that the board of management of St Mary’s were intent on closing the nursing home element of the service”, she said.

The HSE had also advised the board of St Mary’s “that it was willing to engage jointly with Hiqa” to review a timeframe for implementation of its (latter’s) recommendations.

Also surprised at the June 3rd announcement that all three homes were to close was the Sisters of Charity leadership itself, an informed source insisted.

There are 330 Sisters of Charity in Ireland, average age 81.

It is claimed that those Sisters sitting on relevant boards felt bound by confidentiality from discussing goings on at their particular board with the congregation’s leadership or with those Sisters who sat on the boards of the other two companies.

The almost simultaneous decision to close all three homes was described to The Irish Times as “a perfect storm.”

So Mr Brabazon would appear to be occupying a somewhat crowded space in his surprise at the recent abrupt announcement that St Mary’s is to close.

He was very happy with the care his wife Kay received there and with the staff who were “excellent, so friendly. They were perfect. And they kept it Covid-19 free. I’m still incensed by the whole idea.”

“But I didn’t want to move Kay. My first school was with nuns and I have no bad memories,” he said. “I had respect for nuns but it is greatly diminished.”

Feeling as aggrieved is Trish Healy. Her mother Kay (Mountaine) Martin (77) has been at St Mary’s since 2017 with advanced Alzheimers. The situation was “extremely upsetting”, she said. She had found out from staff that she would have to find another nursing home for her mother and soon, she said.

‘Names on a plaque’

She has yet to find another place for her mother.

To compound her anger was Kay’s history of raising funds for the Sisters of Charity, as did Kay’s own mother Kathleen Mountaine too, also through the Variety Club of Ireland of which both were members.

“They helped build the swimming pool at St Mary’s,” said Trish. “Their names are on a plaque there,” she added. And so they are, along with other life members such as Éamon de Valera, Seán Lemass, Bing Crosby, his wife Kathryn, Dublin comedian Jack Cruise, Butch Moore, Paddy Cole, and other members of the Capitol Showband.

“St Mary’s and the Sisters [of Charity] have failed in their principles,” said Trish Healy “and are seriously compromising our mum’s health”. It was “all very, very rushed and I’ve sent a letter to the management and board [of St Mary’s] telling them they will be held culpable if Kay gets Covid-19”, she said.

Two advocacy groups for older people have also expressed concern at the decision to move residents from both nursing homes during a Covid-19 pandemic.

Celine Clarke of Age Action said “we have seen that many people living in nursing homes are in a vulnerable situation during Covid-19 so the stress associated with a relocation is now exacerbated both for the residents and their families”.

Mervyn Taylor of Sage Advocacy spoke of “growing concern” at the closure of St Mary’s. “Whatever the strategic importance of this valuable site for others in the future its real importance lies in the fact that the current residents see it as their home,” he said.

He noted how in 2017 the Sisters of Charity provided unrestricted funding of €632,052 “ for the specific purpose of the development/reconfiguration” of facilities at St Mary’s to meet Hiqa recommendations, and how in its 2018 annual report directors indicated the company would “continue as a going concern for the foreseeable future”.

Where the two nursing home were concerned, the Sisters of Charity said last month they were “extremely disappointed to learn that there may not be enough funds to pay statutory redundancy to the staff”, at St Mary’s or St Monica’s.

Last Thursday week, August 6th, the liquidators moved into St Mary’s and a majority of staff were given until the next day to leave. Some of those staff hadworked at St Mary’s for many decades. A selected few were retained to facilitate the wind-down.

The liquidator told them by email on August 6th (seen by The Irish Times): “It is with regret that the Company does not have the financial resources to continue to pay the vast majority of its employees.”

It continued: “As your assistance will not be needed post-7 August, you will be put on lay-off without pay for the remainder of the consultation process. Accordingly, you will not be required to attend for duty or carry out your role during this time but we will continue to engage with your representatives or directly with you (if you are a non-unionised employee) until the end of the ongoing consultation process.”

The staff were advised “return all Company property in your possession by close of business Friday 7 August and provide any password or login details to your computer.”

Staff who spoke to The Irish Times were reluctant to go on the record, despite their deep sense of injustice and anger at this treatment, as the liquidator is also “preparing and submitting claims on your behalf to the Department of Employment Affairs and Social Protection” as he said in the Thursday, August 6th, email.

It means more than 20 staff have been left with no access to social welfare benefits as they have been informed this would have a negative impact on their redundancy claim to the department.

Also being moved on are the 19 people with various disabilities who live independently in units beside St Mary’s, many of them who have been living there for most of their lives.

Among those already moved from St Mary’s are 11 elderly Sisters of Charity. “They were moved pretty rapidly after the June [3rd closure] announcement,” said a source. All were relocated to the same nursing home in Drumcondra. “It’s not easy to get 11 beds at such short notice,” added the source.

5 Coronavirus: 539 new cases and 14 further deaths in the State as more than half a million doses given