‘A good day for Northern Ireland’: North to reinstate A-level grades after outcry 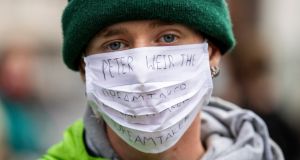 Northern Ireland school leavers who received a final mark lower than that predicted by their teachers are to have their grades reinstated, the North’s Minister for Education announced on Monday.

The significant shift in policy by DUP Minister Peter Weir was followed just hours later by a similar move in England.

A- and AS-level students will now be awarded either the grades predicted for them by their school or college, or the official grade they were awarded by the exam board last week, based on whichever is the highest.

GCSE results – which are released on Thursday – will be based only on the predicted grades supplied by teachers.

There has been widespread controversy over this year’s exam results in the UK, with students, parents, teachers and politicians complaining of a statistical “anomaly” that has downgraded marks at A and AS levels.

According to the exam board, the Council for the Curriculum, Examinations and Assessment (CCEA), 37 per cent of estimated A- and AS-level grades were lowered during the standardisation process.

Speaking at a press conference at Stormont on Monday afternoon, Mr Weir said his “prime concern” was to “ensure that the young people in Northern Ireland are in no way disadvantaged compared to their peers elsewhere.

“This approach [based on predicted grades] is now being adopted across all of the UK, and that is why I’ve made this decision today.”

Approximately one-fifth of second-level students in the North receive qualifications from English and Welsh exam boards.

Mr Weir, who until Monday afternoon had defended the A- and AS-level grades awarded to students last week, rejected the suggestion that he had bowed to political pressure on the issue, saying there was “no perfect solution” to replacing exams cancelled this year due to the coronavirus pandemic, but the overriding concern had been to ensure that “as much as possible we’re fair to everybody”.

He said the CCEA was working to release the revised A- and AS-level results to candidates as quickly as possible.

“This is fantastic news,” said Michael Allen, the principal of Lisneal College in Derry. “We asked you to listen and you did. A good day for Northern Ireland.”

The president of the National Association of Head Teachers, Geri Cameron, said the move was the “only sensible and just thing” the Minister could have decided, and it was “extremely good news for students, parents, teachers and head teachers, whose lives have been on hold for the last few days”.

The SDLP’s education spokesman, the West Tyrone MLA Daniel McCrossan, welcomed the announcement as “a win for our teachers and their professional judgment, but most importantly, a win for our young people”.

He called on the Minister to offer a “full and genuine apology” to students for the distress caused, and to teachers “for the way their professional judgment was cast aside”, and said the algorithm used to work out the grades awarded last week should be made public so “lessons are learnt from this debacle”.

Sinn Féin MLA Karen Mullan said the move was “the right decision and was the only sensible response to the problems which were evident last week”, but added that the Minister “should have taken the action earlier and on the merits of the arguments rather than waiting on the approach of ministers in London”.

Mr Weir’s announcement came amid a similar U-turn by the British government, which announced on Monday afternoon that A-level results in England were to be revised and based solely on teachers’ assessments.

The controversy over this year’s exam grades is to be debated by MLAs at Stormont on Tuesday, after all parties, with the exception of the DUP, backed a motion to recall the North’s Assembly from summer recess.

Later, the British education secretary Gavin Williamson announced the U-turn there after acknowledging that there were “real concerns” about results.

Mr Williamson said he decided to allow results in England to be based on teachers’ predicted grades, rather than an algorithm devised by Ofqual, after he became aware of data from the regulator days after A-level results were published.

Mr Williamson has apologised for the distress caused by the debacle following mounting criticism from students, heads and dozens of Tory MPs.