‘I’d go to bed, and suddenly I was thinking I’m in my office’ -– the bedroom as workplace 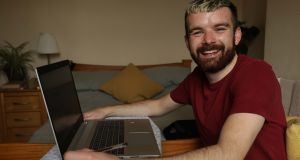 Jake Ryan in the bedroom of the house that he rents with three others in Phibsboro, Dublin. Photograph: Damien Eagers

“In a house share the only private, personal space you have is your bedroom,” says Jake Ryan (26), who lives with three others in a rented redbrick in Phibsboro, Dublin.

“But during Covid your bedroom has become your workspace. In the evenings you want to switch off after work, and if you’re in the office, you walk home, you actually leave that place.

“Now, when the only place you have privacy is also your workspace, you can’t switch off, because you associate it with work.”

Mr Ryan, a constituency worker for Social Democrats co-leader TD Róisín Shortall, was in the Dublin North-West politician’s office when then taoiseach Leo Varadkar announced the closure of schools and colleges and limits on gatherings – early steps in a series of restrictions that became more severe as the weeks went by.

Initially, Mr Ryan’s concerns were technological – laptops and remote access to secure servers were needed. He spent the first couple of weeks working a lot on his phone. He set up the house’s ironing board in his bedroom as a makeshift office space as he did not have a desk.

Coronavirus Data Dashboard
Inside Politics · Coronavirus: are we losing control?

“My employer offered to buy me a desk, but space was too cramped and I can fold up the ironing board in the evening,” says Mr Ryan, who pays €550 a month for his room.

He and his housemates decided against using the kitchen table for working in order to avoid “a commotion” when someone wanted to make a cup of tea or grab a bite to eat, so it became the “canteen”.

Whereas he was used to only seeing his housemates in the evening, they started meeting for breakfast, before retreating to their rooms to work, then meeting again in the “canteen” for lunch.

He says feelings of isolation and claustrophobia soon crept in.

“I suffer from anxiety and I found that it really brought it to the fore,” he says. “Particularly in the early days when you couldn’t get out and about and see people.”

Mr Ryan was “quite strict” about turning off the laptop and email notifications on his phone. “But I would go into my room at night to go to bed and suddenly I was thinking I’m in my office. I’d be thinking ‘did I do this thing or that thing for work?’, because I am in my workspace.”

In recent weeks, he was delighted to regain access to an office and would like the flexibility of a few days working from home and a few days there.

He says the pandemic opens up a “whole different conversation” about the state of Ireland’s rental market.

“I think people in house shares don’t get factored in, even though we are paying so much money. We can see now that many houses are not necessarily suitable for working from home.”