Millennials during Covid-19 pandemic: ‘God, my life is passing me by’ 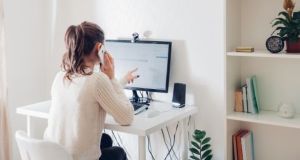 Dr Yseult Freeney, associate professor in organisational psychology at Dublin City University, believes there is a hidden struggle in working from home if sharing a property with others doing likewise. Photograph: iStock

The difficulties faced by Ireland’s millennials during the coronavirus pandemic were largely forgotten about in the rush to help others get through the crisis, a psychologist and a trade union official have said.

Studies show that the mental health of twenty- and thirty-somethings, swathes of whom lost jobs or had to work from cramped shared accommodation for prolonged periods, was hardest hit during the peak of the pandemic.

“Their life is on hold,” she said. “They are not meeting people, they are not going on dates. There is a sense they are not making any progress with their lives – that feeling of ‘God, my life is passing me by’.”

Figures from the Central Statistics Office (CSO) show an 80 per cent fall in the number of 18- to 34-year-olds who rated their overall life satisfaction as high in recent months when compared to two years ago.

While other age groups also reported lower satisfaction with life during the restrictions, the drop was sharpest among millennials.

Nearly half of the age group reported being very happy with their lives in April 2018, according to a CSO survey. Just one in 10 reported the same satisfaction this year.

Abrupt unemployment, having to return to parents to ride out the crisis and the loss of a social life were key factors, but Dr Freeney believes there is a hidden struggle in working from home if sharing a property with others doing likewise.

She said it was “not just pragmatic issues” such as pressure on wifi connections, but also “the fact you have two worlds colliding”.

Coronavirus Data Dashboard
Inside Politics · Coronavirus: are we losing control?

“It is not just working where we live, but a lot of people feel like they live where they work. When you have two, three or four people all trying to juggle those boundaries it is incredibly intense,” she said. “There is no escape, people are being pushed together and they haven’t planned for it.”

Dr Freeney says the experience in shared houses is radically different to that of married couples or families, who are more likely to have established ways of negotiating challenges together.

“Some are using the kitchen table for just part of the day, then working on their bed. If your bedroom is now your workspace, you never really switch off. When there are no boundaries between work and life, we have no opportunities for proper recovery from work.”

The result can be stress, disengagement, emotional exhaustion and possible burnout, Dr Freeney said, adding that employers and the Government need to focus more on these living arrangements when discussing the benefits of remote working.

Some larger employers have succeeded in getting equipment out to workers’ homes and offered wellbeing courses online, says Keira Keogh of Junior Chamber International Ireland, a networking organisation of mostly millennial professionals. But she said smaller employers do not have the same resources.

As well as the usual tensions over the use of communal spaces – like the kitchen while someone is working at a dining table – Ms Keogh says differing attitudes to coronavirus are also causing friction.

“If you have someone isolating themselves as best they can, and their flatmate is bringing in a different person every day of the week for a dinner or barbecue, that causes discord.”

Millennials were the most likely age group to feel nervous (51 per cent), downhearted or depressed (45 per cent) and lonely (42 per cent) during lockdown – significantly higher than older age groups, according to CSO’s Social Impact of Covid-19 survey.

Almost a third who drank alcohol said they were drinking more (compared to 7 per cent of over-70s), while seven in 10 were eating more junk food and sweets (compared to less than three in 10 over-70s).

Bernard Harbor, of Fórsa trade union, which represents many younger public service workers, said millennials and their particular circumstances have been totally overlooked in the national discussion about a shift to remote working.

“The enthusiasm for the shift away from the workplace has led people to gloss over some of the issues,” he says.

Mr Harbor said there are a range of health and safety issues, under Irish and European legislation, that employers need to heed where people are working from home.

“They have a legal commitment to make sure people’s health and safety is minded and that includes mental health. There are mental health issues around this,” he says. “Employers need to look at this. For some employees remote working is fine, for others, they are really struggling.”

Mr Harbor said public and private sector employers can no longer continue with “arrangements that were put in during an emergency” if they are to avoid future industrial relations cases.

“Most employers have not done enough to meet the specific issues of this age group . . . They have to come round to the fact that you can’t sustain emergency conditions for the rest of the future. Employers have to deal with this now.”