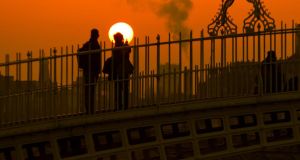 The Pew Research Centre has found religion “very important” to 23 per of Irish people, with 37 per cent attending religious services at least monthly and 19 per cent praying daily.

Almost seven in 10 people in Ireland (69 per cent) believe in God while 26 per cent do not, according to a survey carried out by a US research group.

In general, it found great differences in attitudes among eastern and western Europeans towards religion, minorities and social issues such as gay marriage and legal abortion, with western Europeans (including the Irish) much more liberal.

It found religion was “very important” to 23 per of Irish people, with 37 per cent attending religious services at least monthly and 19 per cent praying daily. Meanwhile, 88 per cent of Irish people said they were raised Christian with 80 per cent describing themselves as Christian, a drop of 8 per cent since a previous survey in 2015.