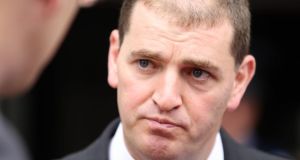 Minister of State for Defence Paul Kehoe. In August, former Fianna Fáil minister Pat Carey, chair of the charity’s board, wrote to the Minister seeking an extra €140,000 in State funding, due to the “serious financial situation” facing the Irish Red Cross

State funding to the Irish Red Cross will be increased to nearly €1 million a year, to help prevent a financial crisis at the organisation.

The decision comes as the organisation plans to refocus from international humanitarian work, towards a “charity begins at home” strategy, documents show.

In August, former Fianna Fáil minister Pat Carey, chair of the charity’s board, wrote to Minister of State for Defence Paul Kehoe seeking an extra €140,000 in State funding, due to the “serious financial situation” facing the charity.

The charity is dealing with a significant funding shortfall, with fundraising down on budgeted expectations. Increasing costs around regulation compliance had placed the charity in a “very vulnerable position”, Mr Carey said.

Correspondence between the Irish Red Cross and the Department of Defence, who provide their grants, were released to The Irish Times following Freedom of Information Act requests.

In a business case seeking extra State funding, the charity said it had cut its support staff from 63 to 55, with two further redundancies expected next year.

The funding request said the charity’s local ambulance service was “always at the ready to step in” to assist the State in responding to extreme weather events.

Staff cutbacks included redundancies at the international department, which has been rolled into secretary general Liam O’Dwyer’s brief.

Minutes of a meeting between department officials and the Red Cross in late July said the charity was drafting a new strategy. Following a survey of members, the common message was the organisation “should focus more of its efforts within Ireland” and that “charity begins at home”, minutes detailed.

The minutes said this approach “differed from the view at HQ”, but the new strategy “will reflect the wishes” of the membership.

Responding to questions on the charity’s new strategy, a spokeswoman said the “international work of the society continues alongside our national work”.

The “heavy involvement” of the charity over the last year assisting the State in response to several extreme weather events, such as flooding and storms, had highlighted the need to provide extra support to local branches, the spokeswoman said.

In recent months that charity has considered several measures to address financial difficulties, including selling off assets, and using local branch funds to cover shortfalls running the national head office.

The charity has been embroiled in previous controversies over accounting procedures and governance standards in the last decade.

Earlier this month, Mr Carey was re-elected chair of the board at a meeting of the organisation’s general assembly. Former Fine Gael TD for Dublin South Olivia Mitchell was also appointed to the board, and elected vice chair.

The charity has not launched a major emergency appeal since 2015. However it is currently running appeals for humanitarian crises in Yemen, Myanmar, and Indonesia.