It was a quiet bank holiday in Gurteen, as the automatic ban for drink-driving came into force 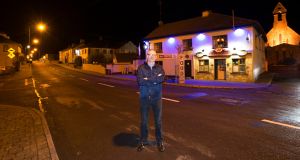 Publican Adrian Tansey on the road through Gurteen, Co Sligo, outside his pub the Crossbar. Photograph: Brian Farrell

Inside the Crossbar pub the outer bar is empty with the pool table idle, and looking like it has been for some time.

But around the corner in a cosy lounge bar decorated with Halloween witches and lanterns, there is a buzz of conversation from about 25 people, many of them seated at tables where food has been served.

“Come back in an hour and the place will be empty,” says publican Adrian Tansey. Food accounts for 60 per cent of his turnover, he says, up from 30 per cent 10 years ago.

Last Saturday night, 48 hours after implementation of the controversial road traffic legislation stating that drivers caught with 50-80mg of alcohol per 100ml of blood will automatically be disqualified from driving for three months, the publican had a long night – but not pulling pints, he is careful to point out.

He catered for two parties that night, a 60th and an 18th with the latter a small family affair. While both groups had a designated driver who was on water all night, there were still people who needed a taxi, and according to Tansey there is just one in the village. At weekends it is usually booked for trips to nightclubs in Sligo or Carrick-on-Shannon.

“I had to sit here with them until 4.30am before they could get a taxi. I am breaking the law by having people here until 4.30 in the morning but what do I do, put them out on the street?”

Tansey has run the Crossbar for 19 years and is a Gurteen native. He says business has changed dramatically over the years: “I would once have needed three or four bar staff on a bank holiday weekend but I have one on tonight.”

There are four pubs in the village but the silence on the street suggests that none were busy this bank holiday weekend.

Tansey introduced food to the Crossbar two years after taking over. It’s labour intensive but like Sky Sport, which costs €700 a month, it’s a service he can’t afford to cut. “There was a big Liverpool game on during the week and I had six lads in, two on pints of blackcurrant which I provided, and four who had two pints each. So I sold eight pints that night but if I got rid of Sky they’d go somewhere else and the place would have been empty that night.”

Gurteen, close to the county borders of Mayo and Roscommon, is synonymous with traditional Irish music and is particularly famous for its links to Michael Coleman, regarded as one of the most influential fiddle players of the 20th century.

Locals have been waging a fierce battle to save the post office, which was due to shut its doors on Wednesday but has won a reprieve for another three months. “They say we need 500 people but we did our own census and we have 512,” says Tansey. He says the post office caters for 1,100 transactions each week, everything from a stamp purchases to pensions and banking, and the postmistress is so busy that she needs help three days a week.

The logic of closing the service is as baffling to him as the drink-driving legislation which he insists makes no sense. “I am not condoning drink driving. I have taken car keys off more people.” Road deaths occur, he insists, “when people have seven, eight or nine pints on them.”

The latest change to the drink-driving legislation is a talking point in the bar.

Local couple Joe and Noeleen Mulligan live about 2km from Gurteen and remember when they used to go out knowing they would meet up with neighbours and friends.

Noeleen says the law is “unfair” and has changed people’s lives. “It is nice to get out. It is very unfair really that you can’t go out for one or two drinks and have food, and be able to drive home.”

Her husband points out that you never know if there will be a taxi available so one person stays on the water or a relative has to be lined up to do a pick-up.

“Years ago you’d go out maybe once a week to meet up with workmates for a night out but that is all gone. We have not met up with friends for a long time.”

His wife says people are “fearful” since last week’s changes which mean an automatic ban for anyone over the limit. “People are dependent on their licences. They need them to get to work.”

Tansey says he has almost no clientele in the 18-24 age group. “They don’t go to bars. They buy their beer in the off-licence, drink at home and then go to the nightclub.”

Once upon a time a corner of the bar was taken up by older men, many living alone but they don’t come any more either.

“They are gone. Occasionally if they are in the post office, they will come in and have a pint and a half one, but you very rarely see them at night. They are afraid to come out now because of the drink-driving laws. There has to be isolation.”

Driving people home isn’t feasible, he says, because his insurance would not cover him if a customer fell getting out of his car. “I did price a seven-seater but the insurance would have been from €5,000 to €7,000 and if I drove it I’d have to take someone else on in the bar. And to be honest it would be open to abuse with people coming in late to get a free lift home.”

He says Minister for Transport Shane Ross should not have proceeded with the legislation without some form of transportation like an Uber taxi-style system for regions where there is no meaningful public transport system. “It should have been thought out. We [vintners’ representatives] did speak to him on numerous occasions but you were as well off banging your head off a stone wall”.