Blasphemy is gone from Constitution but why should we stop there?

Time to expunge other dated articles to create inclusive document 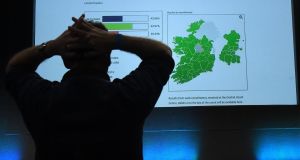 A man looks at the results of the blasphemy referendum. Photograph: Clodagh Kilcoyne/Reuters

Ireland is now a country of many parts. Reflecting on results of the last three referendums, it is clear that there is a strong mood among voters for a Constitution that is more in line with an increasingly diverse society.

There are now in Ireland many Christian denominations, many different religions and a rapidly growing cohort of people who profess no religion at all.

This being so, it is merely an acknowledgement of reality to remove those provisions in the Constitution that are more specific to one denomination (Catholicism) of one religion (Christianity).

This should not be seen as an attack on our largest Christian denomination, whose role and legal status in Ireland would not be diminished by removing such elements from the Constitution.

Indeed these provisions too could be described as “largely obsolete”, to use a description of the blasphemy provision by the churches in the lead-up to last Friday’s referendum.

Such references would include the preamble to the Constitution. It reads:

“In the Name of the Most Holy Trinity, from Whom is all authority and to Whom, as our final end, all actions both of men and States must be referred, We, the people of Eire, Humbly acknowledging all our obligations to our Divine Lord, Jesus Christ, Who sustained our fathers through centuries of trial (a clear reference to persecution under the Penal Laws) ... Do hereby adopt, enact, and give to ourselves this Constitution.”

Article 6.1 reads: “All powers of government, legislative, executive and judicial, derive, under God, from the people, whose right it is to designate the rulers of the State and, in final appeal, to decide all questions of national policy, according to the requirements of the common good.”

Article 12.8 deals with the oath President Higgins will have to swear on November 11th next, as do all incoming presidents. It begins :“In the presence of Almighty God I do solemnly and sincerely promise and declare that I will maintain the Constitution of Ireland and uphold its laws, that I will fulfil my duties faithfully and conscientiously in accordance with the Constitution and the law, and that I will dedicate my abilities to the service and welfare of the people of Ireland. May God direct and sustain me.”

Similarly with article 31.4, under which every member of the Council of State “shall at the first meeting thereof which he [italics mine] attends as a member take and subscribe a declaration in the following form: ‘In the presence of Almighty God I ... do solemnly and sincerely promise and declare that I will faithfully and conscientiously fulfil my duties as a member of the Council of State’.”

Article 34.6 prescribes that “every person appointed a judge under this Constitution shall make and subscribe the following declaration: “In the presence of Almighty God I ... do solemnly and sincerely promise and declare that I will duly and faithfully and to the best of my knowledge and power execute the office of Chief Justice (or as the case may be) without fear or favour, affection or ill-will towards any man, and that it will uphold the Constitution and the laws. May God direct and sustain me.”

Article 41 deals with the family, which is not defined.

Duties in the home

At 41.2.1 it says that: “In particular, the State recognises that by her life within the home, woman gives to the State a support without which the common good cannot be achieved.” At 42.2.2 it continues that: “the State shall, therefore, endeavour to ensure that mothers shall not be obliged by economic necessity to engage in labour to the neglect of their duties in the home.”

It was hoped to include removal of this provision in Friday’s referendum but last September it was agreed to postpone it to allow the Oireachtas Committee on Justice and Equality to undertake further scrutiny of what changes may be required.

Then there is Article 44.1 of the Constitution, which deals with religion. It says: “The State acknowledges that the homage of public worship is due to Almighty God. It shall hold His Name in reverence, and shall respect and honour religion.”

Further, all references to “man” in the Constitution should be replaced by the word “citizen”. For instance, on private property, article 43 1 1 reads: “The State acknowledges that man, in virtue of his rational being, has the natural right, antecedent to positive law, to the private ownership of external goods.”

Removal of these provisions from the Constitution would mean it becomes a purely legal document that respects all citizens of Ireland without implicitly excluding any.

1 Passenger who promised driver a ‘few quid’ after crash awarded €10,000
2 Miriam Lord: Minister for Agriculture tries to get himself out of the manure
3 Coronavirus: One more death and 24 new cases reported in the Republic
4 Driver whose car ‘rolled nine metres’ into front of other vehicle loses rear-ending claim
5 Barry Cowen tells Dáil he is profoundly sorry for ‘stupid’ drink-driving offence
Real news has value SUBSCRIBE