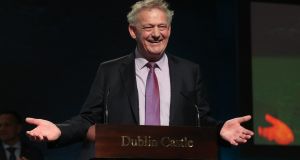 John Leahy, leader of the Renua party and a member of Offaly County Council, believes he lost 300 votes in his home-town of Kilcormac when he was wrongly accused of encouraging the local authority to offer a house to a Traveller family.

On Friday, Mr Leahy voted for presidential candidate, Peter Casey. So, too, did more than 9,000 other voters in Offaly. “He wasn’t afraid to come out and say this is wrong. I don’t think anyone disagrees with what he said.

“And I think he’s being rewarded for coming out and speaking the truth,” said Mr Leahy, adding that many councillors have come to the conclusion – on the back of poor behaviour by some Travellers – that there are “no votes” in trying to help them.

“There’s Travellers living in the community who are decent, honest and good people and are contributing well to the community but there’s an element of the Travellers that are not helping themselves,” Leahy went on.

During one debate on a future five-year plan for Traveller housing needs in Offaly, he said he voted for a second official halting site in Tullamore, but it ran into a dead end when local settled residents opposed it. Just one other councillor had supported the plan.

However, settled dwellers are furious about the conduct of some Travellers in setting up illegal halting sites: “People are very angry out there and people need to realise it. I’ve seen them leaving sites with rubbish and litter left behind.

“There is a thing out there at the moment where people are not happy to see Travellers with brand new vans and not working and people are asking questions. It’s the stigma that’s attached to Travellers.

“Not all Travellers are bad but there’s an element of Travellers that are associated with crime, with occupying sites, in terms of sites they own themselves putting multiple caravans on it, unauthorised developments,” he went on.

Tullamore-based Sean O’Brien, a former Labour Party and Independent councillor, who campaigned for Mr Higgins, said Mr Casey “stood up for something” and won support because of that: “People are crying out for a voice that will represent them and he became that voice.

“I’d be totally opposed to unofficial sites and poorly kept sites.I think there’s an onus on the Travelling community and particularly the organisations that represent Travellers to step up to the mark and say if certain things are wrong.

“I think Pavee Point should have said to the Travellers in Tipperary take those houses,” he said.

Fine Gael Offaly TD, Marcella Corcoran Kennedy, condemned Peter Casey for taking a “cheap shot” at a marginalised group where the suicide rate for men is seven times that of the settled community.

“He obviously tapped into something that’s worrying people and you have to appreciate that,” she accepted, “To be honest, I believe that kind of narrative is very dangerous in terms of leaning in the direction of Trump politics.

“We have to be careful about what we say about people. If there are problems, we have to deal with them obviously but, at the same time, I felt he was debasing the campaign by going in the direction he did.”

The settled people have “plenty of criminals”, the Fine Gael TD insisted: “We mustn’t forget that either. Just targeting a specific group is easy, anybody can do that and he just kept himself in the headlines.”

Despite the challenges facing Travellers, she said current Government policies were reaping rewards, particularly in education.

Meanwhile, Peter Casey received his highest support nationally in Tipperary – the constituency where he raised the Traveller issue in the first place after he criticised a number of Traveller families for refusing to accept offered council houses.

Though some argue that the Casey result is being exaggerated, Margaret Casey of the Tipperary Rural Travellers Project expressed concern that future Dáil and local election candidates will seek to exploit tensions.

“I think the majority might pull out that card when they look at how well he [Peter Casey] has done . . . I’d say a lot of them will play dirty into the future in terms of running for elections, local and national.

“I think we’re seeing a different and more nasty tone coming out. It was probably always there, but it’s coming to the front now,” said Ms Casey, who protested about Peter Casey’s arrival at the Cabragh Bridge houses outside Thurles during the campaign.

Fianna Fáil councillor Seamus Hanafin was a member of Tipperary County Council’s Traveller Accommodation Committee when a deal was agreed a decade ago to offer the Travellers there houses in return for leaving an unauthorised site.

“When you tease it out with people, there are people who feel nobody is speaking for them. There’s nobody voicing their frustrations. It’s general frustration with how they feel about how the last 10 years have been for them.”