One resident says, ‘Once the people left, the very next day, the students moved in’ 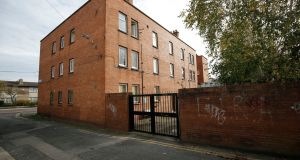 An elderly resident at McSweeney House, a Catholic Housing Aid Society (Chas) complex for senior citizens on Berkeley Street in Dublin, has said he cannot see the need for the demolition of the complex built just over 30 years ago.

Chas has sought planning permission from Dublin City Council to demolish the block of 21 apartments built in 1984 and build a complex of 35 senior-citizen apartments.

Chas has moved nine of the residents of McSweeney House to other properties, and has replaced them with 18 students, more than tripling the rent they are earning on the nine one-bed flats.

One resident, who asked not to be named, said he could not understand the need to demolish the block. “They’re not really all that old, and there are no problems in my flat, no damp, it’s a good size, the heating is perfect... I don’t see the need to pull it down. It upsets me a lot.”

He said some of his neighbours had been “very upset” by moving, but had been under the impression that they had to leave as demolition was imminent.

“Once the people left, the very next day, the students moved in. They are really nice, they’re Brazilians mostly”, he said, but he thought it was very unfair people moved out in the belief the building was to be demolished quickly, when nothing was planned until next summer “that’s if they get planning permission.”

Chas chief executive Miceal McGovern said the building, despite its relative youth, was no longer fit for purpose. “There are sewage problems underneath the building, it wasn’t very well built in the first place.”

There had been regular meetings with the residents, he said, and those who had left had mostly gone to Fr Scully House, a recently built complex on nearby Mountjoy Square.

He acknowledged that some remaining residents did not want to leave and said the extra money earned from student rents would be used to help pay for local flats which currently cost €1,200-€1,400 a month to rent.

“We know there are people who are very attached to the area and we have agreed with them to get them private rental accommodation in the area.”

He hoped to have relocated all tenants by Easter next year, with demolition to begin in June and the new complex to be completed in 2020. Chas wants to keep renting the flats to students until the beginning of next summer.

City council deputy chief executive and head of housing Brendan Kenny said he did not see a problem with the vacant flats being let to students.

“People complain when flats in the city are left empty. Detenanting can be a very slow process so it needs to start early,” he said. “Having students in there in the short term is better than having them empty.”

However, Independent councillor Mannix Flynn said it was “wholly inappropriate” that students would be replacing pensioners in senior-citizen blocks.

“I have spoken to residents who are really distraught, who thought they had to move because their homes are being demolished, when there isn’t even planning permission yet. I think it’s bizarre Mr Kenny would think it was acceptable for them to be moved out of senior-citizen homes so that students could be moved in.”

In 2014, Chas was involved in a seven-month rent dispute with the city council over Fr Scully House, a €17 million complex of 99 apartments.

The society wanted to charge significantly higher rents for the new apartments than average rents for housing built using a State-funded scheme.

Following the intervention of then minister for the environment Alan Kelly, Archbishop of Dublin Diarmuid Martin and the Housing Agency, rent agreements were reached.