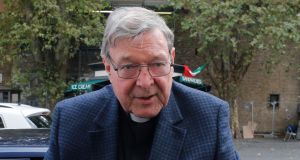 A former senior Vatican cardinal, whose resignation was accepted by Pope Francis last month, has been accused of using €700,000 of Catholic Church funds to bribe witnesses to help secure a sexual abuse conviction against a rival, Australian cardinal George Pell.

Italian media reported at the weekend that Cardinal Giovanni Angelo Becciu (72) is suspected of sending the money to Australia, to help ensure hostile testimony in the abuse trial of Cardinal Pell, who was accused of molesting choir boys when Archbishop of Melbourne in the 1990s.

Before returning to Australia in 2017, where he was tried, jailed and acquitted on appeal, Cardinal Pell (79) had served as prefect of the Vatican’s Secretariat for the Economy between 2014 and 2019, where his attempts at cleaning up practices there were opposed by Cardinal Becciu.

He had held an influential role in distributing and investing millions of euro of donations by Catholics as the Vatican deputy secretary of state between 2011 and 2018, when Pope Francis appointed him Prefect of the Congregation for the Causes of Saints.

On September 24th Cardinal Becciu was sacked by Pope Francis and stripped of his privileges as a cardinal, as a Vatican team investigate his spending record at the secretariat of state.

It followed suspicions aroused by multimillion euro investments he supervised involving luxury property in London’s Chelsea and where the Vatican lost millions to consultants. He has also been accused of directing Vatican money to charities and businesses run by his three brothers.

Cardinal Becciu has denied all wrongdoing.

In 2016 he and Cardinal Pell clashed when the latter ordered an audit of Vatican finances by an external accountancy firm. Cardinal Becciu overruled him and blocked the audit.

After 13 months in jail and his acquittal last April, Cardinal Pell returned to Rome last week. In Australian media interviews on his release from jail he linked his attempts at cleaning up Vatican finances with his prosecution on child abuse charges. Last month, commenting on the sacking of Cardinal Becciu, he “thanked and congratulated” Pope Francis.

A lawyer for Cardinal Pell’s accuser has denied he received any money in connection with his evidence.