‘In a way, when you are a grandfather you are deemed by society to be irrelevant’

Grandfathers Against Racism formed after the murder of George Floyd and hold a small protest in different parts of Dublin every week since. Video: Enda O'Dowd 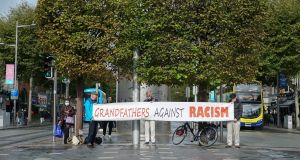 From left, Benny McCabe, Kevin Crian and Ronan Wilmot hold a protest every Tuesday against racism across Dublin since the murder of George Floyd. Photograph: Enda O’Dowd

As they unfurled their banner of protest under the shadow of Dublin’s Spire, the three men behind it did not shout, leaving their poster to say it all.

It read simply “Grandfathers Against Racism.”

Ten grandfathers have been carrying out a dignified and largely silent protest at locations across the city for more than six months.

Their aim is to “bear witness to human values” and stand up against a tide of racism that continues its creep across the world. Each week they choose a different location and gather in a socially distanced fashion to roll out their poster.

“We generally get a very positive reaction,” Kevin Cronin said. “Young people in particular seem to relate to older people coming out and making a statement like this.”

The group – many of whom have been activists fighting injustice for decades – came together during the referendum to repeal the 8th Amendment and back then their poster read “Grandfathers Say Yes.”

“In a way when you are a grandfather, you are deemed by society to be irrelevant,” Mr Cronin said. “There is this perception that you don’t count for anything much but we have been lucky in life and we want to stand up and be counted.”

He was speaking in the aftermath of the chaotic US presidential debate when the current incumbent Donald Trump controversially declined multiple opportunities to condemn white supremacist groups.

“It is unbelievable what has been happening in the US and how Trump seems to be defending racists or at least being very slow to condemn them and I would be very worried about the aftermath of the election there,” he said.

He stressed that while xenophobia-fuelled populism as witnessed in other countries may not be as pronounced in Ireland, it was present all the same. “There are groups of disaffected and angry people and we can’t be complacent and say we are going to be untouched by the spread of racism.”

Standing two metres away was Benny McCabe. “Most of the time people are great and ask if we need anything, bottles of water or cake and they beep their car horns in support as they drive past.”

He paused. “There are some who are suspicious and some who are angry. I remember one time in Ballsbridge, near the US embassy, a person rolled down the window of their car and shouted ‘Go home you old f**kers.’ But that doesn’t happen often.”

A psychologist by profession, Mr McCable said: “Racism can be very subtle. It is a societal issue and what we want to do is just bear witness to human value. I think framing this as a left versus right thing is too simplistic. This is not a political thing, it is a human thing. And we need to have a conversation about racism and we need to bear witness and say that as a group of grandfathers, racism is simply wrong.”

As to the future, the group has no grand plans to see their movement get bigger although they do appreciate support. “The aim is not to see this grow. The important thing is to bear witness.”