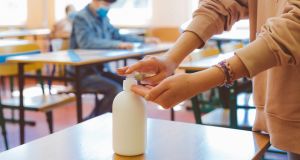 The Department of Education has asked schools to withdraw more than 50 hand sanitisers, wipes and detergents from schools after it was unable to guarantee if they were safe to use. Photograph: iStock

Schools are scrambling to secure supplies of hand sanitiser after the Department of Education ordered the withdrawal more than 50 products due to potential safety concerns.

The move follows a review of sanitiser products after the Department of Agriculture last week requested that a hand sanitiser - ViraPro - be withdrawn due to safety issues.

The short notice given to schools has caused anger and frustration among teachers’ unions and school managers who say principals will be under acute pressure to secure supplies in time for the reopening of schools on Monday.

It also sparked criticism from Oppostion parties such as Labour, which said the development raised questions around whether the department was fit for purpose to steer schools through the Covid crisis.

The department, however, said it was working with suppliers to ensure stock is provided to schools in time for the reopening of schools.

In a statement, it said it had written to all schools to advise them of changes to its approved list of products and the steps they can take to procure new stock.

It said suppliers have committed to swift processing of orders and delivery to support schools.

The department said it was taking 22 hand sanitisers, 14 wipes, eight hand soaps and eight detergents off its approved list for schools because it had “not been possible to satisfactorily confirm their registration status as part of the review”.

It said these products will not be included on its approved list for schools until their registration status is confirmed. The department said it has no evidence that these products are unsafe.

The step was undertaken in consultation with the Department of Agriculture, which is the regulator in Ireland for biocidal products.

Where schools have stocks of the products listed as “removed”, whether purchased through a central procurement agreement or purchased locally, they have been instructed not to use them.

Schools impacted by the removal of these products will be provided with funding to source new supplies.

The department said it has issued to schools an updated list of all the new products on the agreement with all relevant associated pricing.

The suppliers and products on the agreement will be monitored on an ongoing basis and any further changes to the list will be notified to schools.

It said it has engaged with suppliers in the last few days to ensure there is sufficient stocks available for schools to order.

Schools seeking new product to replace stock are requested to contact any of the suppliers on the agreement directly to process orders.

Any school that is impacted by this will be provided with funding for an aide for two days to assist with dealing with these issues.

In response to the announcement, the Irish National Teachers’ Organisation said it was very concerning that many of the products on the approved list of resources have now been deemed inappropriate.

“That this information has come to light during the mid-term break is very unsatisfactory. School leaders and boards of management needed this break to recharge after an incredibly stressful nine weeks,” said INTO general secretary John Boyle.

Teachers’ Union of Ireland general secretary Michael Gillespie called for a full standards audit of all the products that have been procured and said he was pleased that the Department has acted on that call.

“We must all do everything possible to protect the health and safety of all in the school community and, therefore, the use of defective or sub-standard products must be eliminated. We want real security, not the illusion of security, for our members, their students and their families.”

He urged the department to ensure that replacement products of the required high standard are supplied to schools as a matter of urgency so that school opening can be sustained.

“Cutting corners or skimping on costs is false economy,” he concluded.