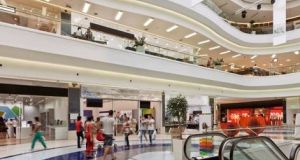 Confidence in visiting physical stores increased by five points in the survey, with 61% of consumers now feeling it is safe to do so, putting Ireland second in Europe in this category. Photograph: Getty Images

Irish retailers and service providers have succeeded in assuring many people that it is safe to start living normally again, and consumers are increasingly confident when visiting shops, a new survey suggests.

However, the appetite among consumers for overseas travel decreased slightly during the last month, according to Deloitte Ireland’s “State of the Consumer Tracker”.

The surveys have been monitoring Irish consumers’ attitudes towards personal wellbeing, financial concerns, travel and hospitality, transport and retail during the Covid-19 crisis.

Confidence in visiting physical stores increased by five points, with 61 per cent of consumers now feeling it is safe to do so, putting Ireland second in Europe in this category, just behind the Netherlands (62 per cent).

The results are based on a survey of 1,000 consumers in 18 countries, and the most recent data was gathered between July 7th and July 11th, the week after the State entered the third phase of the plan for lifting Covid-19-related restrictions.

Consumers who were reporting feeling “less anxious than last week” remained consistent on 27 per cent when compared with research carried out in mid-June, making Ireland Europe’s sixth most confident nation.

Some 48 per cent of Irish consumers remain worried about their physical wellbeing, an increase of 2 per cent since the previous tracker.

Some 61 per cent said they were concerned about the health of their family, up from 58 per cent in mid-June.

The possibility of losing a job was a concern for 29 per cent of respondents (down from 31 per cent), while 22 per cent were worried about making upcoming payments, consistent with the last survey.

Consumers are becoming more confident in engaging in one-to-one services such as hairdressing, with confidence level rising to 58 per cent.

Planned expenditure in restaurants has surged, with 37 per cent now confident about visiting a restaurant compared with 28 per cent in mid-June. However, 57 per cent of consumers said they would still prefer to purchase take-away food via online channels.

The intent of Irish consumers to spend on travel has plateaued, with 20 per cent actively seeking travel deals, consistent with the previous tracker. Confidence in air travel has remained consistent, with only 19 per cent saying they would feel safe doing so – down one point on the last survey.

Confidence in hotel accommodation has increased by eight points to 38 per cent.

Daniel Murray, head of consumer at Deloitte Ireland, said the results were “encouraging for businesses getting back on their feet”.

He said the most significant rises in confidence related to people visiting restaurants and in engaging in one-to-one services.

“The steady increase in consumers feeling safe to make in-store purchases is a testament to the work done by retailers across the country in preparing their premises for reopening and in some cases, such as grocery and pharmacy, adapting their stores while remaining open during the initial phase of lockdown restrictions.”

1 ‘It was pitch black’ - Rescued teenager describes night afloat with her cousin in Galway Bay
2 A million trees, including 400,000 oaks, to be destroyed this week
3 Aaron Brady, the man who said with pride he was a cop killer
4 Inside the O’Brien Fine Foods factory in lockdown Kildare
5 Schools urged not to demand clean uniforms each day
Real news has value SUBSCRIBE