Principles of contraceptive ban ‘ignored for too long’, says bishop 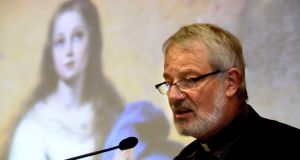 Catholkic Bishop of Elphin Kevin Doran said the ‘contraceptive mentality’ in society was linked to the ‘surprisingly high number’ of people in favour of same sex marriage. Photograph: Cyril Byrne

The principles of Humanae Vitae, which banned artificial means of contraception, “have been ignored for too long” and need to be presented in a “fresh way”, the Catholic Bishop of Elphin Kevin Doran has said.

Bishop Doran was speaking at an event in Dublin marking the 50th anniversary of Pope Paul VI’s 1968 encyclical Humanae Vitae. About 150 people attended the conference, which was organised by the Nazareth Family Institute, which organises Catholic pre-marriage courses and “marriage enrichment” courses.

“The principles of Humanae Vitae have been ignored for too long and need to be presented in a fresh way,” he said. “As a church, we probably have not lived up to that demand. It needs to be presented in contemporary language in an appropriate context.

“There is undoubtedly a place in schools for an appropriate presentation of the church’s teachings on human sexuality. I think we have, again, problems to address there. Not least, having a very good quality, Catholic inspired programme for relationship and sexuality.”

Bishop Doran said it was “lopsided” to regard marriage as “simply a loving relationship” in which procreation was regarded as “an optional extra”.

“Humanae Vitae teaches that every act of intercourse should be open in principle to the gift of life, but also that it’s perfectly legitimate for married people to make use of the married cycle both to achieve pregnancy and to avoid it,” he said.

“In a world which has embraced abortion and is flirting more and more with euthanasia, it may seem almost foolish to even suggest at this time that we should attempt to regain the ground that has been lost,” he said.

“To propose once again as Paul VI did a coherent and integrated vision of human sexuality in which the unitive purpose of the sexual act is never separated from the openness to the act of giving life.”

“It may seem to some that contraception has liberated women insofar as it allows them to take control of their own fertility,” he said. “But the fact that they are less likely to become pregnant also takes away from women one of the principle motives or freedoms for saying no to unwanted sex.”

Bishop Doran added that the “contraceptive mentality” in society was linked to the “surprisingly high number” of people in favour of same sex marriage.

“If the act of love can be separated from its procreative purpose, then it’s also very difficult to explain why marriage needs to be between a man and a woman,” he said.

“There is a very direct connection between the contraceptive mentality and the surprisingly high number of people who seem ready to redefine marriage today as a relationship between two people without distinction as to sex.”

Another speaker at the conference on Saturday, Dr Marie Meaney of the International Theological Institute, delivered a presentation on reproductive technologies, in which she said the practice of in vitro fertilization (IVF) was “murderous”.

“Multiple human embryos are produced, and then you choose the ones that seem the most healthy or the most viable,” she said.

“How does it make the handicapped people, the people with special needs, the sick in our society feel knowing that all the small children who are in anyway afflicted are eliminated? We are creating a culture of death by doing that.

“We may do it, claiming we are being compassionate. But we are murderous in our acts. It is a face, an appearance of compassion and Christianity, but behind it is something very, very different. Very cruel.

At the conclusion of the conference, contributions from the audience included suggestions that the principles of Humanae Vitae ought to be “declared boldly” and without apology.

Responding to the bishop’s speech in a tweet on Sunday, Minister for Health Simon Harris wrote: “Please just make it stop! Increasing access to & availability of contraception is and will remain public health policy. Religion plays an important role for many on an individual basis - but it will not determine health and social policy in our country any more. Please get that.”