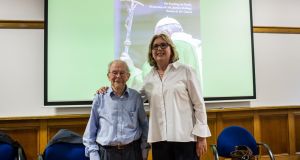 Former president of Ireland Mary McAleese speaks in DCU at the book launch of the book The Pope Francis Agenda by Donal Dorr. Photograph: James Forde/ The Irish Times.

The abuse scandals in the Catholic Church were now entering “an even more disrupting chapter,” former president Mary McAleese has said.

She quoted veteran Vatican correspondent Robert Mickens as saying that, in order to solve the underlying problem, Pope Francis will “have to devote the rest of his pontificate almost exclusively to this gargantuan endeavour.”

The former editor of UK magazine The Tablet claimed the abuse issue now theatened “to engulf his papacy and do lasting damage to Francis’s own reputation”, Mrs McAleese recalled.

She continued that “the recent and ongoing scandals and the McAreavey, McCarrick and Wilson resignations are signalling that this issue is now entering an even more disturbing and disruptive chapter”.

Bishop of Dromore John McAreavey resigned last March following his dealings with an abuser priest. Former archbishop of Washington DC Cardinal Theodore McCarrick resigned from the cardinalate last week in the connection with allegations of abuse involving minors. Last week also the former archbishop of Adelaide in Australia Philip Wilson resigned after being sentenced to a year in prison for covering up a case of clerical child sex abuse.

Mrs McAleese was speaking in Dublin at St Patrick’s Drumcondra at the launch on Thursday evening of the book The Pope Francis Agenda by theologian Fr Donal Dorr.

Ireland may be the place where Pope Francis could make “hope and history rhyme”, former president Mary McAleese has said. He could do so “by disclosing the plan many of us have been hoping for and many more have given up on along with giving up on the church,” she said.

“Ireland is no secular wasteland where God has been abandoned in the race to selfish consumerism,” she said. It is “a country profoundly Christianised for 1,500 years, the homeland of Columbanus who courageously saved Christianity from complete demise in medieval Europe and whose vision for a Europe of partners inspired the four Catholic-educated founders of the European Union, ” she said.

She said she found Pope Francis’s well-known line, “who am I to judge?” when discussing gay people, problematic. It ignored his responsibility for church teaching “ which says that homosexual acts are contrary to the natural law, are acts of grave depravity and that so-called deep-seated homosexual tendencies are intrinsically disordered”.

The phrase, who am I to judge “only has credibility if Francis leads an agenda of change, not just of language but of openness to a searching review of church teaching and practice. That does not appear to be on Francis’s agenda,” she said.

As problematic for her was the pope’s “rather inchoate commitment to a more equitable role for women in the church”. He had offered no coherent plan for the future inclusion of women beyond the sticking plaster of a few token mid-ranking appointments,” she said.

The World Meeting of Families (WMF) was about “showcasing and reinforcing the . . . church’s implacable opposition to marriage equality, gay parenting, adoption by gay couples, direct abortion in any circumstances, artificial contraception and divorce”.

Ireland “where all the above are apparently approved of by a majority of Catholic Church members” would “challenge Pope Francis and his fellow Cardinals”, she said.

She wondered whether the WMF in Dublin would “showcase a Church led by Francis towards radical ecclesiastical reform and renewal or will it, as the WMF has traditionally done, signal an ecclesiastical retreat into strict orthodoxy underpinned by a call to renewed obedience to the magisterium? Time will soon tell.”

In Ireland Pope Francis “will be warmly welcomed and every word uttered by him and his many accompanying Cardinals will be listened to and analysed very carefully by the most educated, engaged and ecclesiastically literate Irish generation ever,” she said.