Catholics in North urged to stop legalisation of abortion 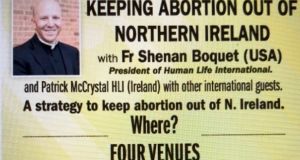 Human Life International says it intends to campaign to keep abortion out of the North by “dispelling the darkness, spreading the light of truth”

The president of an international anti-abortion organisation has called on Catholics in Northern Ireland to “keep the wolf out of the field” and prevent the legalisation of abortion there.

Fr Shenan Boquet, the US-based leader of Human Life International (HLI) – self-described as “pro-life missionaries to the world” – spoke to 100 people at a public meeting in a Carmelite retreat centre in Derry.

In the first of four meetings in the North, HLI said it intended to campaign to keep abortion out of the North by “dispelling the darkness, spreading the light of truth”.

A further meeting took took place in Maghera, Co Derry, on Wednesday night; while the others are scheduled for Garvaghey, Co Tyrone, and in Belfast.

Abortion is illegal in the North in most circumstances, including in cases of fatal foetal abnormality, incest or rape.

Fr Boquet said the “contraceptive mentality” had led directly to abortion because “through contraception you say no to new life”.

Referring to Pope John Paul II’s visit to Ireland in 1979, Fr Boquet said the pope had then told young people in the Republic that the country’s future was in their hands.

Today, however, the majority of 20- to 30-year-olds in the Republic backed abortion in the May referendum, said Fr Boquet: “You can see the breakdown in the understanding of the human person, the beauty of marriage, the beauty of life.

“This radical social change has come to your beautiful land, and it’s been going on for decades, incrementally growing, so the remedy for this is not going to be the snap of a finger either, it’s going to take a concerted effort.”

Blaming “indifference and complacency” for the referendum result, Fr Boquet told his Derry audience: “We have a choice here, and we have an opportunity to stop something before it comes a reality. No one can sit on the sidelines, that’s why we’re here because too many sat on the sidelines. We can stop it here in its tracks.”

Referencing the placard held aloft by Sinn Féin leader Mary Lou McDonald and the party’s Northern leader Michelle O’Neill after the referendum result in the Republic was announced, the executive director of HLI in Ireland, Patrick McCrystal, told the meeting “the North is not next”.

“When those two Sinn Féin ladies lifted up that banner saying the North is next I thought to myself, what a despicable image to go around the world. We proclaim that Jesus Christ is lord of Northern Ireland, and we say no to abortion in Jesus’s name.

Calling on Catholics and Protestants to unite, he said Northern Ireland was “one of the last places in the world not to have full legalised abortion”, which was due “in no small part to our Protestant brothers and sisters”.

“We can’t do it without our Protestant brothers and sisters,” said Mr McCrystal, a former pharmacist who resigned from his job because of his unease at dispensing the contraceptive pill.

He said he had already spoken with Protestant pastors and politicians in the North. “They’re receiving the message very well, and they too want no abortion in Northern Ireland.”

The anti-abortion campaigners were now intending to hold prayer vigils as “I believe that we can change the psyche of this province back to God to stave off this threat”.

Replying, Sinn Féin said it respected opposing opinions, but called for a respectful debate, saying the referendum campaign had been conducted “in a responsible, mature and respectful way”.

1 Covid-19: Government set to reject advice and approve reopening of gastropubs and restaurants
2 Miriam Lord: Helen McEntee holds up well for someone with barely a leg to stand on
3 New direct ferry to Dunkirk will be valuable entry point for lorries to Europe after Brexit
4 Restaurants and gastropubs to reopen in December under Government plan
5 School at centre of major Covid-19 outbreak unaware of case for days
Real news has value SUBSCRIBE