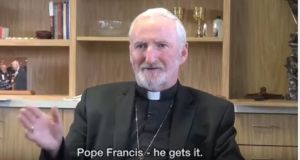 Bishop David O’Connell speaking in the original version of a video promoting the World Meeting of Families 2018.

The Association of Catholic Priests has said it find it “impossible to understand” why words of Auxiliary Bishop of Los Angeles had been edited out of a promotional video for the World Meeting of Families 2018.

It has called on Archbishop of Dublin Diarmuid Martin, who is hosting the event which will take place at the end of August, to issue a statement clarifying the matter.

Words of welcome from the Cork-born Bishop David O’Connell for gay people raising children and people in second marriages were removed from the video.

“Pope Francis, he gets it. Today there are all sorts of configurations of families – mum and dad; mum or dad on their own; gay couple raising children; people in second marriages,” he said. These have been cut.

A spokeswoman for the World Meeting of Families 2018 has insisted however that everyone will be welcome to the event which is being hosted by Archbishop of Dublin Diarmuid Martin at the end of August next.

She noted how, in Amoris laetitia, “Pope Francis specifically stresses that ‘every person, regardless of sexual orientation, ought to be respected in his or her dignity and treated with consideration’ . . . as is repeated throughout the parish programme.

“The meeting has always been understood as a meeting open to all. This remains the position of the World Meeting of Families in Dublin.”

In a statement on Tuesday, the association, which represents between a third and a half of Catholic priests in Ireland, said it was concerned that “following the earlier removal of photographs from a leaflet, the organisers of the World Meeting of Families have now also removed the words of Bishop O’Connell” from their promotional video.

“His words were such that we find it impossible to understand how anyone who supports the message of PopeFrancis could object to them.”

It was the case that “no clear statement has been made as to why these actions were taken, and on whose direction. Both leave themselves open to interpretations which are very damaging to the WMOF.”

“Without clear explanations, questions like these, and many others, will continue to be asked.”

The ACP concluded: “We believe that it is important that Archbishop Diarmuid Martin makes a statement clarifying why these two alterations were made, who decided on them, and why. Otherwise any further effect to present the WMOF as a welcoming place for everyone will be seen for what it is, empty rhetoric.”