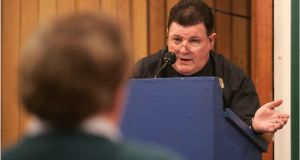 Survivors of sexual and physical abuse in schools run by the Catholic Church in Ireland have demanded a meeting with Pope Francis to discuss compensation during his visit to the island in the summer.

The Irish Catholic Church has invited the pontiff to a religious conference in August. It will be the first papal visit to Ireland since John Paul II’s tour in 1979.

The Guardian has seen a letter from the Irish Survivors of Child Abuse (Soca), in which the campaign group calls for a meeting with Pope Francis during the visit to ask why Catholic religious orders have not paid out more in compensation to abuse victims.

The group sent the letter to Archbishop of Dublin Diarmuid Martin and asked him to pass on their request to the Vatican.

Soca is angry about a deal between the Catholic Church and the then Irish government in 2002 that resulted in the taxpayer footing most of the bill for compensating those abused in religious institutions.

The deal resulted in the church having to pay €128 million of a €1.3 billion compensation bill.

Last year, the Comptroller and Auditor General found that only €85 million in compensation had been paid out of church funds.

On top of its criticism of the original deal, Soca said the church should be forced to pay out in full the agreed €128 million.

In the letter to the archbishop, one of the co-founders of Soca said survivors also wanted Pope Francis to hear about what they described as the “Violence R Us” culture in religious orders such as the Christian Brothers, which ran Ireland’s notorious industrial schools.

“At this time I don’t intend to recite the sums involved but they are substantial, and a debt of honour to Ireland is overdue since much remains unpaid and the orders have shown themselves unworthy in this respect,” the founder, John Kelly, writes.

“These matters should now be handled by the papal authorities in Rome through a special remittances office to be established for the purpose. There should be no further quibbling over money owed to the Irish State.

“We are saddened that notwithstanding numerous inquiries over the past 20 years the religious orders that operated institutions on behalf of Church and State have not been properly held to account.”

Soca is hoping to hear a response from the archbishop and the Vatican within the next two weeks.

A 2,600-page report released by a child abuse commission in 2009 found that rape was “endemic” in more than 250 Irish Catholic care institutions from the 1930s to the 1990s, and that the church in Ireland protected paedophiles in its ranks from arrest or prosecution.

The report found that boys in industrial schools such as Artane in north Dublin were treated more like convicts and slaves than children. – Guardian service