As temperatures drop below zero doctors are assessing rough sleepers to determine the state of their mental health. In extreme cases homeless people who refuse accommodation maybe sectioned. 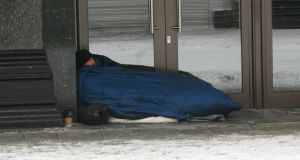 A member of the homeless community is seen on Henry St in Dublin’s City Centre on Thursday. Photograph: Collins 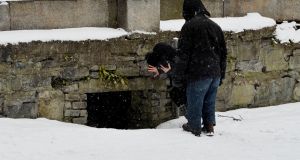 Members of the Safetynet / Simon Community attempt to coax a homeless person living in a hole in a wall near a waterway in Dublin to accept an offer of accommodation on Thursday. Photograph: Alan Betson/The Irish Times

At least 30 people slept rough in Dublin on Wednesday night despite the best efforts of outreach workers to persuade them into emergency beds.

Temperatures in the capital overnight fell as low as -5 degrees.

The Housing First Intake Team (HFIT), operated by Focus Ireland and the Peter McVerry Trust, will be out with medical personnel through Thursday, again trying to get people who have so far refused offers of emergency beds, to take them.

Among those who slept out, according to a spokesman for the Trust, was a woman in the doorway of the Savoy cinema on O’Connell Street and another individual in Fairview Park.

“The HFIT managed to encourage a number of people sleeping rough to come in off the streets. However, 16 people in the city centre and 14 in the Dublin region, were engaged and supported but declined to come into emergency shelter. They will be re-engaged [with] today,” said the spokesman.

Among the reasons some have given for not wanting to go into hostels are fear of violence, drugs or having items stolen.

The Trust, which is managing a “severe weather beds” facility at a sportshall in Dublin 8, accommodated 106 men there on Wednesday night, up from 81 on Tuesday night and 45 on Monday.

“In Kildare, one additional person was accommodated after they called the out of hours emergency free phone number there.

This brings to 14 the total number of emergency placements provided by Peter McVerry Trust in the county in the past 48 hours,” said a spokesman.

In Cork city, the Simon Community accommodated 47 people in its year-round emergency facility. It has increased capacity at its winter shelter from 15 to 20 during the severe weather, and accommodated 22 there on Wednesday night.

At its day service, which has been open 24 hours since Tuesday morning some 50 people presented throughout Wednesday.

In Limerick city, 13 people had a hot meal at the Simon Community’s drop-in centre, which is funded by Limerick City and Co Council. All had some hot food and rested. A “substantial number” of people collected food from Simon foodbanks in Clare and Limerick, a spokeswoman said.

The “major concern” for many services to homeless people was ensuring adequate staff cover. Depaul, for example, is keeping its services at Thomas Street, Little Britain Street, Mount Brown and Blessington Street open 24 hours a day until Sunday.

Where other employers were running on reduced staff numbers homeless services needed extra staff cover though the current weather, said a Depaul spokeswoman.

“Our services are running at full capacity and even beyond. Our main concern at the moment is ensuring we have sufficient staff given the problems some are having getting to and from work. A lot of staff are working longer shifts to ensure cover while others get in. One staff member coming in from Kildare yesterday took two hours to get in.”

A spokeswoman for the Simon Communities said a number of their staff were staying at the hostels overnight to ensure their availability through the severe weather.