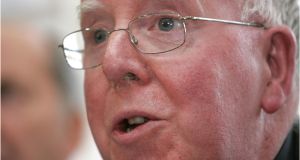 John McAreavey has resigned as Catholic Bishop of Dromore with immediate effect following controversy over his decision to officiate more than 15 years ago at the funeral Mass of a priest known to the diocese as a child abuser.

Dromore diocese includes parishes in counties Antrim, Armagh and Down.

A BBC Spotlight programme on Finnegan was broadcast last month and included interviews with three of his alleged victims. It had been investigating allegations against the priest over recent months and how these had been handled by Catholic authorities.

Prior to the broadcast, Dr McAreavey issued a statement saying the first allegation against Finnegan came to light in 1994, some seven years after he left St Colman’s College.

“The second allegation came in 1998 and was not related to his tenure at St Colman’s. No further allegations emerged until after his death in January 2002,” he said.

He said that since becoming Bishop in 1999 “everything I have learned about the abuse of victims I have learned from victims. It is their testimonies and their stories, which have impacted most on me.

“It is through their perspective that I realised that my decision to say the funeral Mass of Malachy Finnegan in 2002 was the wrong one. In November 2002 a victim told me how hurt he was by this, I realised that I had made an error of judgement. It is something I regret and will not repeat.”

He described Finnegan’s actions as “abhorrent, inexcusable and indefensible.”

Almost simultaneously the board of governors at St Colman’s College, of which Dr McAreavey is chair, issued a statement saying it had ordered that Finnegan’s image be removed from all photographs on display in the college.

It condemned “in the strongest possible terms the physical, sexual and emotional abuse inflicted by Malachy Finnegan when he was in the employment of the college over 30 years ago.”

It was “devastated that any pupil who was entrusted to the care of St Colman’s College should ever have suffered abuse.”

This week it emerged that parents of children attending some primary schools in Co Down had said they did not want Dr McAreavey to take part in Confirmation ceremonies.

A spokesman for Dr McAreavey confirmed that “some concerned parents from the Hilltown area whose children are to receive the sacrament of Confirmation later this year inquired whether they could” meet the bishop.

“The parents were met by the bishop, the director of safeguarding and an adviser to the diocese. The adviser chaired the meeting. Parents expressed their reservations about this year’s Confirmation service in light of the revelations of the Spotlight programme,” he said.

Dr McAreavey “made it clear that he understood their position and that he would not be an obstacle to their wishes when the time came. That remains his position,” the spokesman added.

It has since emerged that Clonduff GAA club in Hilltown Co Down, where Finnegan had served for a time, urged those who may have been affected by the priest’s actions to contact the police.

In a statement, it said it had been “made aware” by club members past and present or their family and friends that they may have been abused by Finnegan.

“Clonduff GAA Club advises anyone who has been a victim of Malachy Finnegan’s abuse to bring this to the attention of the PSNI,” it said.

In a statement to the BBC through his solicitors, Dr McAreavey said his resignation is to take “immediate effect”.

“Following media reports which have disturbed and upset many people in the Diocese and further afield, I have decided to resign with immediate effect. I shall make further comment in due course.”