Priests concerned at Archbishops’ request for public worship over Easter

Association has ‘significant misgivings about re-opening churches for Easter ceremonies’ 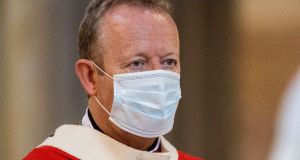 Eamon Martin the Archbishop of Armagh and Primate of All Ireland has urged the Taoiseach to consider increasing the number of bereaved allowed to attend funerals. Photograph: PA

A group representing Catholic priests has expressed misgivings at moves by the Church’s four Archbishops in Ireland to allow people “gather safely for the important ceremonies of Holy Week and Easter”.

They emphasised the spiritual comfort that participation in public worship brings to people of faith and called for it to return, when an easing of restrictions is considered, in particular with the approach of Holy Week and Easter.

The Archbishops also requested consideration of an increase in the number who may attend funeral Masses where a maximum of 10 mourners currently can attend.

The Association of Catholic Priests (ACP), which represents about a third of Catholic priests in Ireland, said on Monday its members “have significant misgivings about re-opening churches for Easter ceremonies, believing it to be a premature and potentially detrimental move.”

It continued that “the post-Christmas surge in new Covid-19 cases and the threat from Covid-19 variants represent a persuasive evidence-based platform to strongly argue against an early return to congregational worship.”

The average age of Catholic priests in Ireland is 70 and a majority of people who attend its Masses and other forms of public worship are in the older age categories.

The ACP statement noted how “numerous priests (many elderly and not yet vaccinated) are Covid-19 frontline workers as they journey with families during sadness and bereavement.”

It supported “priests and pastoral councils in ministering to people while adhering to public health guidelines during this pandemic” and commended “our Archbishops in seeking to engage political leadership about public worship.”

The priests’ statement continued that “our hearts are lifted with the rollout of the vaccination programme.Faith, science, solidarity and empathy will serve us all well in our attempts to overcome this pandemic. Meanwhile, we continue to worship ‘in spirit and in truth’.”