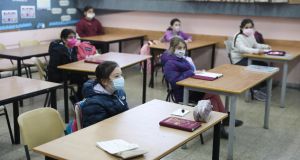 Children wear face masks in class in a Junior School in Jerusalem. Israel reopened schools, almost two months after they were closed due to the coronavirus pandemic. Photograph: Abir Sultan/EPA

Israel lifted many of its coronavirus restrictions and started reopening its economy on Sunday as the country’s vaccination drive and third nationwide lockdown have started to bring down infections.

Most grade school and high school classes have reopened after a nearly two-month closure, along with museums, libraries, shopping centres and markets.

Some restrictions on the number of people in attendance remain in place.

The entire education system is expected to return to normal operations in early March.

Gyms, pools, cinemas and restaurants are reopening for people who have received two doses of the coronavirus vaccine.

Israel unveiled its plan to allow those who have been vaccinated to attend cultural events, fly abroad and patronise restaurants and health clubs by using a “green badge” app on Saturday ahead of the reopening of the economy.

However, the rollout of the app has been fraught with technical difficulties.

After striking a deal with Pfizer to trade data for doses, Israel’s vaccine campaign became the world’s speediest in the past two months.

Almost half of the country’s population of 9.3 million have received the first dose of the Pfizer/BioNTech vaccine, and nearly three million have had their second vaccination.

Israel has faced international criticism for largely excluding Palestinians in the West Bank and Gaza Strip from its highly successful vaccination campaign.

The dispute highlights the Palestinians’ reliance on Israel even as they struggle to combat the pandemic on their own.

Last week, Israel facilitated the transfer of the first 2,000 doses of Russia’s Sputnik V vaccine from the West Bank to the Gaza Strip.

The coronavirus is still spreading rapidly in Israel, however, and restrictions on movement and assembly have remained in place since the government imposed a countrywide lockdown in late December.

Its three lockdowns have paralysed the economy and driven unemployment to more than 20 per cent.

Italy reported 232 coronavirus-related deaths on Sunday against 251 the day before, the health ministry said, while the daily tally of new infections fell to 13,452 from 14,931 the day before.

In a message to honour those caring for Covid-19 patients, Francis hailed the “generous involvement, at times heroic, of the profession lived as mission”.

On the evening of February 20th, 2020, exactly a year ago, a hospital in Codogno, northern Italy confirmed that a 38-year-old Italian man was infected with the coronavirus.

The man had no links to anyone who had been in China, where the Covid-19 outbreak first erupted.

Now, Italy has so far seen more than 95,000 known dead, the second-highest coronavirus toll in Europe after the UK.

Expressing gratitude to doctors, nurses and other health care workers, Francis likened their dedication to “a vaccine against individualism and selfishness”.

The pope said that such dedication “demonstrates the most authentic desire that dwells in the heart of man – be near to those who have the most need, and give of oneself for them”.

Italian president Sergio Mattarella marked the first National Day of Healthcare Personnel by mourning the many medical workers who contracted Covid-19 and died.

According to professional associations in the sector, at least 326 doctors and 81 nurses have died of Covid-19.

Mr Mattarella said the professionalism and self-denial shown by the medical workers contributed to efforts “to avoid the epidemic’s precipitating into an irreversible catastrophe”.

The Italian leader said despite its many shortcomings, the national healthcare system has proven to be an institution “to preserve and to invest in, in order to protect” Italians collectively.

Some of the €209 billion in European Union funding to help Italy rebuild from the devastation of the pandemic, economic and otherwise, will be earmarked to shore up and improve Italy’s public healthcare system.

More Covid-19 anniversary commemorations are scheduled for Sunday in Italy, especially in the hard-hit north, where the outbreak first pummelled the nation.

More than 17.6 million people have received their first dose of a Covid-19 vaccine in Britain, official data showed on Sunday, as daily deaths and coronavirus cases slipped.

Official figures showed that a further 215 people had died within 28 days of a positive test, down from the 445 reported on Saturday, although numbers can be distorted over the weekend.

Mr Hancock said a roadmap to ease England’s third national lockdown, due to be published on Monday, would need to allow time to analyse the data because the government is still concerned the variants could undermine the vaccine roll-out.

However he told Sky News that the initial signs were encouraging.

British prime minister Boris Johnson will set out the roadmap on Monday, having got off to a faster than expected start with Britain’s vaccine roll-out programme.

“It is very important to see the impact of steps that we’re taking,” Hancock said of the next steps. “We want to set out a roadmap which gives people guidance in terms of how we think we’ll be able to do this. We also absolutely will be vigilant to the data on the way.

“We’ve currently seen other new variants that thankfully there’s very, very, very few of in this country now, but we’ve got to protect against them.” – AP/Reuters