Dying with Dignity Bill 2020, if enacted, would place Ireland in a relatively small club 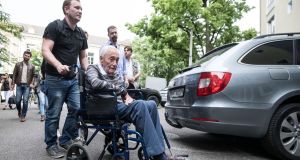 Australian scientist David Goodall on the eve of his assisted suicide at the age of 104, in Basel, Switzerland. Photograph: Sebastien Bozon/AFP via Getty

The Dying with Dignity Bill 2020 is being considered by the Oireachtas Joint Committee on Justice, having been referred to it by the Dáil.

The Bill allows for voluntary euthanasia and assisted dying.

Under the terms of the Bill, a person must have capacity to make their own decision and be terminally ill. They do not have to be nearing death, and do not have to have significant and ongoing decline, or be facing intolerable suffering.

Two medical practitioners must approve their eligibility. The Bill provides for the establishment of a review committee.

Euthanasia: the general term used to refer to steps deliberately taken with the intention of ending a person’s life.

Voluntary euthanasia: where a lethal substance is directly administered to an individual at their own request.

Assisted suicide: providing someone else with the knowledge or means to end their life, at their request. The main distinction that is usually made between euthanasia and assisted suicide is with regard to who performs the final, fatal act – the individual themselves or someone else.

Assisted dying: used to refer to both voluntary euthanasia and assisted suicide.

Switzerland: Assistance with suicide is considered a crime and open to prosecution only if selfish interests are involved. Right-to-die organisations are involved in the process of assisted suicide.

Since it is open to Swiss citizens, foreigners resident there and those who travel from other countries, Switzerland has become an international destination for assisted dying.

The Netherlands: Requests can be made by people from other countries, but a physician must assess whether the patient’s suffering is unbearable and won’t improve, and that their request is voluntary and well considered. The law does not distinguish between physical and psychological suffering, and it allows for euthanasia on a person with dementia in limited circumstances. Euthanasia now accounts for 4.2 per cent of all deaths, a more than threefold increase since 2003.

New Zealand: It held a referendum on the End of Life Choice Act, to authorise the administration of a lethal dose of medication to competent adults with a terminal illness likely to end their life within six months, should they request it. More than 60 per cent voted in favour. The Act will come into force this year.