Opportunity after pandemic to lift children out of poverty, says Niall Muldoon 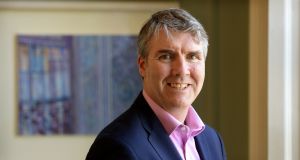 Niall Muldoon, Ombudsman for Children, has just been reappointed to the role for a second six-year term. Photograph: Dara Mac Dónaill

The Ombudsman for Children has called for a “Covid dividend” for children after the pandemic, arguing changed ways of thinking and doing must be harnessed to “lift children out of poverty, end child homelessness and end direct provision”.

Dr Niall Muldoon said children had been among the worst affected by the pandemic and must be at the centre of Government strategies for recovery.

“Facing this crisis we have done things we didn’t think possible before. We’ve borrowed money we wouldn’t even consider before,” said Dr Muldoon, who has just been reappointed to the role for a second six-year term.

“There’s an opportunity here to borrow a bit more – borrowing is never going to be as affordable again – to invest to lift children out of poverty, build enough social housing so everyone has a home, provide a living wage, end direct provision, and create the infrastructure that will end serious injustices for our children.”

He said “political bravery” in times of crisis had led to the creation of the National Health Service (NHS) in Britain in the 1940s, while the New Deal helped rebuild the United States during the great depression a decade earlier.

“We cannot walk away from this crisis and say things will go back to being the same again,” said Dr Muldoon. “Things cannot go back to normal. Normal is only okay for the middle classes who don’t suffer discrimination or poverty, or for those who don’t have disabilities. Normal is not good enough. Things must go back to better.”

Each Government department should be tasked with identifying radical opportunities “to change our children’s future”, he said, suggesting a time-limited Oireachtas committee be established to “kick-start” the process. It could then, he said, be driven by a unit within the Department of the Taoiseach.

A measure that could flow from policies initiated last year would be a universal essential income, based on the Pandemic Unemployment Payment (PUP).

“The PUP was created in three weeks. That is the foundation of a living wage. We now have a baseline. If you had a living wage in every house, then every child in poverty is now in a totally different situation and will have a different future. The positives are to be reaped at the other end.”

There would be a “huge return” to a Government “brave enough” to lead on ensuring a “Covid dividend” for children.

“It would change the psychological perception of the pandemic. Instead of having nothing to show for it, we may come out of this with enough social housing, better schools, a living wage and a society where nurses and guards will be able to buy a house,” he said. “Our world has been turned upside down for 12 months. We’ve got to say what positives can we come out of here with.”