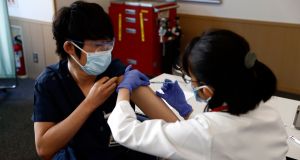 A Japanese medical worker (L) receives a dose of a Covid-19 vaccine as the country launches its inoculation campaign, at the Tokyo Medical Center on Wednesday. Photograph: Behrouz Mehri/EPA

More than 109.5 million cases of coronavirus have been recorded worldwide with more than 2.4 million deaths, according to the latest data from Johns Hopkins University.

New Zealand has reported three new locally transmitted cases of Covid-19, as prime minister Jacinda Ardern surprised many by announcing Auckland’s three-day lockdown would end at midnight. Ms Ardern said she did not believe community transmission was “widespread”, as new cases were minimal, and wastewater testing had reported negative results in the country’s largest city.

Auckland’s nearly 2 million residents were plunged into a snap three-day lockdown on Monday, after a more contagious Covid-19 variant that first emerged in Britain was detected in a family of three - two adults and a child. The two latest cases are siblings studying at the same school as the child. A family member of the siblings has also tested positive on Wednesday.

Auckland will move to Alert Level 2 at midnight on Wednesday, allowing schools and businesses to reopen, while the rest of the country will drop to Level 1 restrictions. “I wanted enough time at a cautious level to give us reassurance,” Ms Ardern said. “Much better to have 72 hours in [LOCKDOWN]than have 72 hours of unchecked spread.”

A five-day snap lockdown in Australia’s Victoria state will end on Wednesday, officials said as they reported no new cases in a cluster linked to a quarantine hotel in the city of Melbourne. State premier Daniel Andrews said most mobility restrictions will be lifted at midnight, but masks will remain mandatory both indoors and outdoors when social distancing rules cannot be followed. The lifting of restrictions will allow at least some spectators at the Australian Open tennis tournament in Melbourne, where players have competed in empty stadiums during the lockdown.

Japan launched its Covid-19 inoculation drive on Wednesday, administering the Pfizer-BionTech vaccine to Tokyo hospital workers, as prime minister Yoshihide Suga attempts to beat the odds and host the Olympics this summer. Workers at Tokyo Medical Centre were among the first of some 40,000 medical professionals targeted to receive the initial shipments of the vaccine. They will be followed by 3.7 million more medical personnel, then 36 million people aged 65 and over. Mr Suga has said that vaccine deployment will be critical to holding a successful Olympics, delayed from last year and due to start in late July. The government is aiming to secure enough vaccines for its entire population of 126 million by mid-2021. A complete roll-out could take a year, vaccination programme chief Taro Kono said on Tuesday. There are also fears that millions of the Pfizer-Biontech vaccine doses could be wasted due to a shortage of syringes required to maximise the number of shots from each vial. Tokyo Medical Centre said it has enough supply for now of the low dead-space syringes needed to extract six doses from each vial. It plans to inoculate 60 people a day starting on Thursday to both minimise the amount of vaccine that could go to waste and monitor people who receive a dose.

South Africa will begin administering the Johnson and Johnson Covid-19 vaccine to health workers on Wednesday, following the arrival of a consignment of the shots. “Health teams worked overnight to distribute the vaccines to most parts throughout the country,” South African Medical Research Council Chief Executive Officer Glenda Gray said in an interview with broadcaster SAfm. “In Cape Town, vaccination will start at 12pm.” South Africa received an unspecified number of the Johnson and Johnson shots overnight and is in talks to procure an additional 20 million doses. The country has recorded more than 1.49 million coronavirus cases, the most in Africa. A total of 48,313 people have succumbed to the disease, the health ministry said Tuesday.

Europe’s drugs regulator could issue an opinion by mid-March on whether to approve Johnson and Johnson’s vaccine under a speedy review.

Sources said the European Union is adding clauses to contracts with vaccine makers to allow the bloc to gain access to possible upgraded shots.

Germany dashed hopes of business lobby groups for a quick reopening of the economy, saying the country should not rush to ease coronavirus restrictions as this could risk another wave of infections.

Denmark registered the more contagious coronavirus variant B.1.1.7, first detected in Britain, in close to half of all positive tests in the second week of February.

Ukrainian health minister said Kyiv’s vaccine purchases were being hampered by “dirty information attacks” that had triggered a corruption investigation against his ministry.

Britain will on Wednesday call for a United Nations resolution to help negotiate ceasefires so that people in conflict zones can be vaccinated against COVID-19, saying member states have a moral duty to protect the vulnerable. Foreign Secretary Dominic Raab will chair a virtual meeting of the UN Security Council on Wednesday to discuss the threat facing the more than 160 million people living in areas of instability and conflict, such as Yemen, South Sudan, Somalia and Ethiopia. Meanwhile, the United Kingdom could give two doses of vaccine to all adults by August or September, the interim head of the country’s vaccine taskforce told Sky News.

The White House is increasing the supply of vaccines sent each week to states to 13.5 million doses, and is also doubling the amount shipped to pharmacies to 2 million doses this week.
Moderna said the release of some of its vaccine doses to the US government have lagged recently because of “short-term delays” in the final stages of production at its contractor Catalent.

The Dominican Republic started inoculating medical staff against Covid-19 on Tuesday as it launched its vaccination campaign following the arrival of the first 20,000 doses of the Oxford University-AstraZeneca vaccine.

India will increase the number of its vaccination sites by up to five times after administering nearly 9 million shots in a month.

Iraq recorded a sharp rise in Covid-19 infections with 3,332 confirmed in the past 24 hours, its health ministry said on Tuesday, after the country confirmed infections of one of the newer variants of the novel coronavirus. The rising cases, approaching levels of infection recorded last summer after a dip during the winter, have prompted authorities to announce a nightly curfew beginning on Thursday.