Why I’m going to see the pope: Four people explain the draw of the papal visit 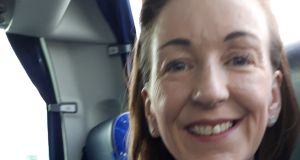 Ciara Reid: ‘I’d like to be part of history’.

Ciara Reid describes herself as “an à la carte Catholic and not devout” but she will be in the Phoenix Park on Sunday. One of the reasons she is going is because she has had “a year from hell” and hopes to find some solace in the words of Pope Francis.

“Our youngest has Down syndrome and has gone through a very difficult period with numerous serious medical interventions including urgent surgery when she was born,” she says. “But in January my faith was shattered when our other daughter was diagnosed with leukaemia. I couldn’t help but ask if there really was a God. We are seven months into it now and it’s been seven months of hell, but on the days when I’m being very optimistic I think to myself that we have good sort of leukaemia. I can believe there is a good sort of leukaemia, but we were lucky in that we picked it up by chance and got it early before she got sick.”

She recalls meeting a woman in Crumlin Children’s Hospital, who had “great faith and she gave me strength and she always would say that she would remember our daughter in her prayers. She lost her son four weeks ago and her faith has got her through”.

Ciara also remembers the last pope’s visit as one of her first vivid memories and her daughter is going to be the same age as she was then, around five or six. “The whole country is going to be talking about it in 10 years’ time. It will be one of those things that is going to be on Reeling in the Years for 2018 and it will be part of our history and I am well enough and fit enough to be able to go and I’d like to be part of history.”

She says her faith remains “rocky but I do think there has to be something there. The reason my husband isn’t coming is because he is going to be looking after a baby, we couldn’t get a babysitter. The thing I have struggled with most is finding somebody who will go with me. It’s not trendy to be in your 40s and wanting to see the pope.”

Orla McAlinden is in her 40s and describes herself as “a feminist, pro-marriage-equality, pro-repeal, pro-non-denominational-education, pro-separation-of/church-and-State, scientifically educated, Mass-going Catholic”. And she says the “cognitive dissonance is killing me”.

She says, it “would be so much easier to jack it in, but I don’t. I’m going to the papal Mass with my four children, but not my husband, and I’m also singing in the stadium choir on Saturday in Croke Park”.

She was raised a Catholic in Northern Ireland in the 1970s and says it was “very different to the Republic in that we saw the church as a defence against the abuses of the State. There were priests who literally put their lives on the line. When I came to Dublin at the age of 18 I couldn’t believe the number of my friends who didn’t go to Mass.

She says it is “really difficult to be a woman in the Catholic Church”, and adds that sometimes she feels “so let down and so betrayed and so secondary. I can’t understand sometimes why I get such solace and such peace and joy from it.

“I’m going to see the pope because I don’t feel that the abuses and the horrors perpetrated by the institutional church are entitled to deprive me of that solace. They have destroyed so many other things, why should they be allowed to destroy my faith too? The institutional abuse of men have failed so many and taken so much from so many, why should I allow them to take the joy it has brought me away, I’m just not prepared to let them do it.”

Caroline Hoffman is 25 and is going to see the Pope because she doesn’t think “we’ll ever see the like of this in Ireland again”.

She sees Pope Francis as “a very progressive pope. I drifted away from religion in my teens and in my early 20s but it’s very important to me now. I think when you are younger you’re trying to find yourself, so what happened to me is not uncommon”.

She says she does not go to Mass every single week and finds her way to a church “maybe twice a month”. She is “pretty definitely the youngest person there when I go apart from the very young children with their grannies. I’m unique amongst my friends and am the only one who goes to Mass. I think they understand although deep down they probably think I’m a little mad but it’s not like I’m a nun or anything, far from it.”

She lives in Dublin 7 close to where the pope will visit the Capuchin homeless centre and her neighbours have the street festooned with papal bunting.”It’s great, they just called in to see if I wouldn’t mind having it put up on my house which of course I didn’t. I didn’t have to do anything. I’m going to be going on my own as none of my friends would be willing to go, but maybe I will wander down with some of my neighbours. I think he [the pope] will probably address the really big issue of abuse but we can’t be placing the blame on him. It all happened before his time”.

Fine Gael senator Neale Richmond is Church of Ireland but will be in the Phoenix Park for two reasons. “I want to see what half a million people look like with my own eyes,” he says. “But more importantly whether you are Catholic or not, the pope is the leader of the world’s largest organised religion and with that comes a huge amount of influence and power and I want to see what he has to say.”

He says Pope Francis “intrigues” him “because he is a very different pope to the other two I have known in my lifetime and I find him fascinating. He is a Jesuit for a start and was a street priest in Argentina and I love what he says about social justice and compassion”.

He says he would never endorse everything that the Catholic Church has done “by any means but I think faith is a good thing and I think on balance religion has done more good than bad. I don’t agree with the vast majority of the teachings of the Catholic Church, particularly when it comes to morality.”

He says the Catholic Church has yet to have that watershed moment when it “lays itself bare before the people and I think it probably does need to do that. I don’t know if it will do that in my life time”.

He says that one thing that really “irks” him is when he hears people “dismissing people of faith and calling them stupid or less intelligent and expressing incredulity they might go to Mass on a Sunday. I can’t stand that. In my job as a public representative I work with a lot of priests and people who are involved in religious communities and they are dealing with hardship cases and the homeless and people who have been victims of domestic violence or who have no money and they very quietly step into the breach and help.”

He points to Brother Kevin of the Capuchin Day Centre, who he says “is doing an amazing thing. But when you dismiss people of religion who are driven by faith you are dismissing people like Brother Kevin or the nun who has worked with children with Down syndrome in Africa for 40 years because they have been abandoned by their parents.”

He also suggests it is “worth acknowledging that many priests “are really good listeners and really well read and they’re intelligent. The Catholic Church is taking a hammering and rightly so but it still has a role to play in our society.”