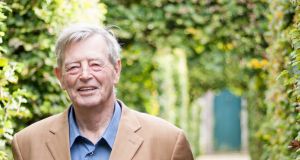 Jim Callery: will be honoured at an event in Finland in May co-hosted by tenor Plácido Domingo and EU commissioner Tibor Navracsics. Photograph: Ruth Lanigan/Irish Heritage Trust

The founder of the Irish National Famine Museum in Co Roscommon has won a major European award recognising work in the heritage field.

Jim Callery has been awarded a 2017 European Union Prize for Cultural Heritage/Europa Nostra Awards for dedicated service to heritage through his work on the museum and archive which is based at Strokestown House in Co Roscommon.

Heritage Council chief executive Michael Starrett said it was a “fantastic achievement” for Mr Callery and others who worked to restore and establish the Irish National Famine Museum and Archive.

“To receive this recognition, particularly on a European scale, is testament to the personal dedication of Jim to Strokestown and Co Roscommon.”

Juries received 202 entries from 39 countries, and selected 29 winners from 18 countries. They were chosen for their efforts in conservation, research, dedicated service, education, training and awareness-raising.

From these, a further seven Grand Prix winners and the Public Choice Award winner will be announced at a ceremony in Turku, Finland, next month.

The Heritage Council has called on people to vote for Mr Callery in the Public Choice Award.

Winners of the EU Prize for Cultural Heritage/Europa Nostra Awards 2017 will be honoured at an event co-hosted by EU commissioner for culture Tibor Navracsics and tenor Plácido Domingo on May 15th at St Michael’s Church in Turku.