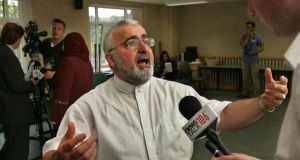 The Islamic Cultural Centre of Ireland has written a “sombre” letter to Taoiseach Leo Varadkar expressing “disappointment” at recent remarks by a Fine Gael councillor.

Dún Laoghaire-Rathdown councillor Brian Murphy had claimed on Twitter that sharia law is “operating in Ireland”. He has been called before the party’s disciplinary committee over social media posts he made.

In a letter to the Taoiseach, Dr Nooh Al-Kaddo, chief executive of the cultural centre, described the “disappointment and offence taken on behalf of the Muslim community” at the comments.

“I write to you as leader of Fine Gael, who as Taoiseach took a giant leap in solidifying the positive relationship between Irish Muslims and their Government by joining us in the early days of your appointment as Taoiseach to celebrate Eid ul Fitr [June religious holiday],” said the letter, seen by The Irish Times.

The letter acknowledged that while Mr Murphy’s comments might have “only been personal” and not the general consensus of the party, they still caused “upset” in the local Muslim community.

Mr Varadkar has said Mr Murphy’s comments do not represent the policies, views or values of Fine Gael. “The party at executive council level will take any necessary action that needs to be taken by them and he’ll be informed of that in due course.”

Dr Al-Kaddo thanked the “expedient condemnation” by Fine Gael of Mr Murphy’s comments. “I trust that the steps you further take will be for the benefit of all of the residents in the Dún Laoghaire-Rathdown constituency and for the nation in general,” the letter concluded.

Dr Ali Selim, a senior member of staff at the cultural centre, said the tweets reminded him of when Donald Trump was running for president.

“I’m not quite sure if the councillor is aware of the meaning of sharia law,” he said.

“It’s a very old-fashioned game, that people try to create fear and then take advantage of that,” he added.

“Why are we talking about sharia law in a country like Ireland?” said Mr Selim. “We have more serious issues to discuss in this country. We should be talking about homelessness, employment and health services.”

Over 65s are expected to ‘crawl into corner and die’, says election hopeful Valerie Cox 20:09
Yacht captain guilty of drunk sailing had ‘God given right’ to be on Liffey 20:06
Labour attacks ‘dysfunctional’ Fine Gael coalition at party launch 19:26
Murder accused told gardaí he cut up woman’s body to make her lighter 19:19
Taoiseach pledges to use national funds to make up any shortfall in EU CAP supports 18:52