Total of 1,337 people have arrived under Ireland’s programme since 2015 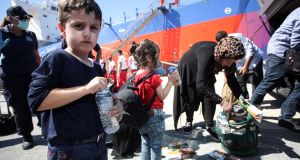 Migrants receive food and water after disembarking from a vessel at the port of Heraklion on the island of Crete on September 5th, 2017, after being rescued off the coast of the Greek island. Photograph: Costas Metaxakiscos/AFP/Getty Images

The State has pledged to take in 600 refugees next year including 330 additional programme refugees as part of a new EU resettlement pledge to support those affected by the migration crisis.

However, the Government has failed to meet its original pledge of bringing 4,000 asylum seekers into the country by the end of 2017.

A total of 1,337 men, women and children have arrived in Ireland under the State’s refugee protection programme since 2015, less than half the original pledge made by the Government.

About 720 of these people have been housed in communities across Ireland while a small number are in the care of the Child and Family Agency Tusla, according to the Department of Justice. The remainder are being housed in direct provision centres around the country and emergency reception and orientation centres in Ballaghaderreen and Monasterevin. A small number are also in special emergency accommodation due to medical or other issues.

The decision to welcome an additional 330 people follows discussions on migration at the EU Justice and Home Affairs Council in Brussels on Thursday where European ministers received updates on efforts to improve migration flows.

Speaking following the event, Minister for Justice Charlie Flanagan underlined the need to continue examining all possible solutions to eliminate dangerous journeys for people fleeing their homes as well as pursuing other legal pathways for regular migration while “removing the initiative from people smugglers”.

Ireland has committed to accepting 2,622 asylum seekers under the relocation strand of the programme including 1,089 people from Greece, 629 people from Italy and 910 people who remain “unallocated”. However, according to the Department of Justice, it has not been possible to relocate people from Italy due to “vetting and security issues”.

An additional 785 people, including 359 adults and 426 children, have also arrived in Ireland under the State’s resettlement programme of refugees and migrants from Lebanon and Jordan. Another 255 people are due to arrive by early 2018, bringing to 1,040 the total of people to enter Ireland under resettlement.

A statement from the department said the IRPP was working closely with local authorities across the country and the Irish Red Cross to secure housing for people who have arrived in Ireland under the protection programme.

Mr Flanagan said on Friday he had requested a review of the IRPP to ensure the State can meet its targets, adding that the programme had offered “ a welcome safe haven for families and children who have been forced to leave their homes due to war and conflict”.

“Ireland expects to be an active participant in current and future pledges in respect of refugees and other vulnerable persons in need of protection,” said Mr Flanagan. “Let me be clear the determination of the Government to deliver on our targets remains absolute.”

‘Ireland has always lived up to its international humanitarian obligations. We have a reputation as a kind, generous people open to the world. I am delighted that the people of Ireland have responded with compassion in welcoming those who have suffered greatly but have found in Ireland a place of refuge.”

A total of 130,133 men, women and children have crossed the sea to reach Spain, Italy, Greece and Cyprus so far this year, while an estimated 2,442 have died or gone missing on the journey.