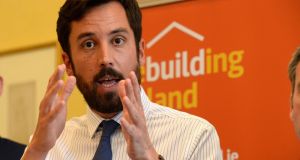 Minister for Housing Eoghan Murphy. ‘I know it has been equally as difficult for people working in the front lines . . . the care workers, the voluntary organisations.’ Photograph: Cyril Byrne/The Irish Times

Minister for Housing Eoghan Murphy praised those working “on the front lines” against homelessness as he visited a midlands housing project that has had an 85 per cent success rate in moving people off the streets.

The chairman of Midlands Simon Community Mark Cooney described the results from its Housing First pilot service in Athlone, Co Westmeath, as a major source of hope.

The Housing First approach houses homeless people and then provides services to keep them in the homes.

He said he had had the opportunity to see some of the work first hand while on a soup run with the Simon Community in Dublin.

“They know that it is important for the people they are dealing with – that they see that kindness.”

He added: “How we spend our money as a State, as a Government; how we spend taxpayers’ money; how we donate our additional extra money to charity says a lot about who we are as a country and as a people.”