Public representatives condemn non-use of homes as ‘outrageous and scandalous’ 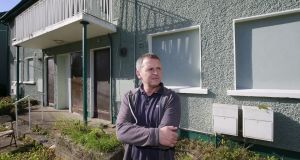 People Before Profit TD Richard Boyd Barrett outside the units in St Laurence’s Park, Stillorgan: council has been “sitting their hands while these homes lie empty while we are in the teeth of an unprecedented housing crisis”. Photograph: Nick Bradshaw

Sixteen bedsits in the heart of Stillorgan on Dublin’s southside have lain empty since bedsits were banned in Ireland four years ago.

The continued dereliction and vacancy of almost 16 units of social housing, in the heart of Stillorgan, Co Dublin, is a “disgrace,” “scandalous” and “very sad”, according to residents and public representatives.

The build has been at the centre of a number of redevelopment plans. Built by the then Dublin Corporation in 1954, most of the units on St Laurence’s Park are boarded-up and increasingly dilapidated. They are owned by Dún Laoghaire-Rathdown County Council.

Maria José Montiro (82) is one of the two remaining tenants and has lived here for 17 years.

The widow describes as “very sad” that most of her neighbours have been moved out by the council, and that the homes are empty “when so many people need a house”.

The four two-storey blocks, each with two “maisonettes” per floor, were formerly homes to elderly, single and two-person households. Found down a quiet road, they are directly opposite Stillorgan library and about a five-minute walk from Stillorgan shopping centre and bus routes into the city centre and out to Bray.

Rusting steel doors are bolted closed over the former front doors and the windows are variously boarded- and bricked-up. While most of the small front gardens are overgrown, all the hedges have clearly been recently trimmed.

In front of Ms Montiro’s home are neatly tended roses, fuschia and pink daisies. “I like the garden. It is very lonely here with most of the people gone, but I like the garden,” she says.

People Before Profit TD Richard Boyd Barrett, whose constituency directly borders St Laurence’s Park, describes as “disgraceful” that the council has been “sitting their hands while these homes lie empty while we are in the teeth of an unprecedented housing crisis”.

He said the dwellings could have been refurbished as eight apartments, demolished and a larger number of homes built on the land, or simply refurbished and brought back into use as small, single-person dwellings.

We have them. They are there. What is the council doing letting them lie empty while people are homeless?

Independent Senator Victor Boyhan says the fact that the homes have remained empty “for all these years is absolutely outrageous and scandalous”.

“There is virtually no social housing in Stillorgan and those homes are so ideally located, especially for older people. They are so close to the wonderful shopping centre, to doctors, dentists, bus routes – everything you could need is on the doorstep.

“They should just be revamped and brought back into use immediately. We have them. They are there. What is the council doing letting them lie empty while people are homeless?

“There are almost exact replica maisonettes on Pottery Road in Dún Laoghaire. I was in one last week and they work very well, the people living there wouldn’t give them up for love nor money.”

The blocks have been at the centre of several redevelopment plans, some involving private-public partnerships for larger developments. Most recently, last year, council planners came under fire for a proposal to knock all four blocks to make way for a swimming pool.

Nearby Glenalbyn swimming pool, which closed in 2013 due to health and safety reasons, was to be relocated on the site of the maisonettes, but the plan was withdrawn following numerous objections. The closed pool remains at the centre of a long-running campaign to have it reopened.

Asked what she would like to happen to the maisonettes, Ms Montiro is clear. “Not redevelopment. I would like to see them re-opened. It is very sad they are closed. I know so many people need a house.”

A spokeswoman for the council said: “Dún Laoghaire-Rathdown proposes to develop at least 75 new housing units and a library at this site, increasing the units available for social housing. The units previously consisted of 16 one-bedroom maisonettes and were designated as senior citizen units.

“This development, when completed, will consist of a mix of one-bed and two-bed units. We consider this the best use of the site as it will accommodate substantially more residents than could be accommodated in the current 16 units. An application for funding has been submitted to the Department of Housing.”

Senator Boyhan said he didn’t “buy yet another plan” from the council.

“They have been talking about plans for years and years and doing nothing. It’s a scandal. Open them up and get people living there.”

3 Covid-19 infection rate in hospitals ‘out of control’