Jack and Emily most popular baby names in 2017 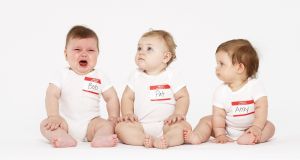 For boys, James came in second place last year followed by Daniel, Conor and Sean as the top five choices.

James came in second place last year followed by Daniel, Conor and Seán as the top five choices, according to the latest figures from the Central Statistics Office.

Back in 1967, John, Michael, Patrick, James and Paul were the names most favoured by parents of baby boys. While there were 2,981 baby boys named John 50 years ago, the five most popular boys’ names in 2017 accounted for 2,765 baby boys.

Emily was once again the top choice for girls, followed by Emma, Amelia, Grace and Sophie.

None of these five names appeared in the top 100 names for girls a half century earlier. Mary, Margaret, Catherine, Ann and Anne were the most popular names for baby daughters in 1967.

Girls are given a wider variety of names than boys, with 4,493 girls’ names registered compared to 3,472 boys.

There were four new entrants to the top 100 names for girls: Aoibhin, Nina, Pippa and Esma.

It also shared top spot in south Dublin with Adam and James. In Limerick city, Jack shared the honours with Adam, while Jack along with Conor was the most popular in Laois.