Demonstration in Dublin to be against Islamophobia and far-right ideologies 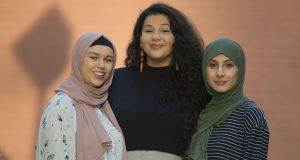 Muslim students (from left) Aisha Siwar, Rosie Al Johmani and Ryma Halfaoui, are organising a march in solidarity with the victims of the Christchurch shootings which will take place in Dublin on Saturday, March 23rd. Photograph: Dave Meehan/The Irish Times

A group of young Irish Muslims has organised a Calling All Allies demonstration for Dublin on Saturday to express solidarity with victims of the terrorist attacks in Christchurch New Zealand last week as well as against Islamophobia and far-right ideologies generally.

It is also intended to express gratitude to the Irish community generally, to politicians, religious bodies and ordinary members of the public for their support.

Participants will gather at the Spire on O’Connell St from 5pm on Saturday before heading to Leinster House with the aim of showing that unity is stronger than hatred.

Attendance is expected to include “a really great mix of younger and older generations from the Muslim and non-Muslim population, from the mosques and the churches, the synagogues. People from DCU, UCD, Trinity, from outside Dublin, people from LGBT societies, Muslim societies. Just people of Ireland. It’s a really good mix of ages and religions, “ said 21-year-old UCD student Rosie Aljohmani.

Ryama Halfaoui (21), the only Muslim trainee teacher at St Patrick’s College, Drumcondra, said the idea for the demonstration “started off with a lot of people posting on social media upset at what is happening and distraught with the New Zealand attacks. Also they just had enough with attacks that have been happening globally.”

She said “it literally happened over a cup of tea. Basically Rosie threw it out there (on social media). She opened up her laptop and started typing away.”

DCU student Aisha Siwar (21) said that “like Rosie a lot of us had reacted quite negatively towards the New Zealand attacks obviously and we also found that there was a lack of outcry compared to other attacks”.

“We were frustrated by this because at the end of the day 51 people have passed away and so many other people are still fighting for their lives in hospital.

“We felt that the silence we experienced was almost deafening so we came together to do something.”

They were going “to take charge of our own narrative and we’re going to create a platform to bring attention to the issue of Islamophobia and also to other minorities who may be getting attacked in a similar manner,” she said.

Growing up in Ireland all had personal experience of Islamophobia.

Rosie Aljohmani, who is of Syrian background but was born and raised in Ireland, recalled how “in Dublin our house was attacked and stones were thrown through the windows. Myself and my sisters were attacked and beaten up by neighbours who were very xenophobic and racist.”

Islamophobia “does exist in Ireland and we’re here to address it, because it is something that is ignored, and to also call on our allies as a lot of Irish people had come on social media to show support for the Muslim community after New Zealand and they wanted to know how they can help,” she said.

Ryama Halfaoui is of Algerian background but has been in Ireland since she was an infant. She recalled how in Ireland “mosques were attacked after 9/11. They get calls in, emails in, hate speech and everything.

“On a more minute level, and I’m sure it’s something most of Irish Muslim youth experience, is this persona of ‘being extra’ – ‘extra nice’, ‘extra friendly’, just to get the respect you wouldn’t necessarily need to in other situations. Kind of proving yourself – I can be Muslim and I’m just as welcome here as you are.”

Aisha Siwar, who is of Moroccan background, was also born and raised in Ireland, said, “ I don’t think there is any Muslim in Ireland who hasn’t experienced Islamophobia to some degree. It might have only been name calling whereas others have actually been attacked. I’ve had friends who have been attacked. I myself was lucky enough to not be physically attacked but I have certainly been verbally attacked,” she said.

She remembered “people throwing eggs at our house, smashing our windows , smashed the car windows, screaming at my parents. I remember after 911 somebody immediately put out the American flag and used scream abuse at us constantly, specially because my mother she was in the hijab. I was only a child.”

When she herself wore the hijab first “these lads who were only about the same age as me , about 13-years-old, they were screaming at me ‘OMG Al Quaeda is here now’ and I’m kind of ‘I was a toddler and so were you’. It is an issue and a growing issue.

“We want to tackle it and we don’t want it to get to the scale that it is abroad even after what has happened in New Zealand.”

Ryama Halfaoui said that in advance of Saturday’s demonstration “we decided to email everyone whether it’s LGBT, the synagogues, the churches, email everyone because that’s what we need because we’re also there for everyone.

“If anybody gets hurt it’s a humanitarian issue not just a Muslim issue, not just a New Zealand issue, not just a terrorist issue, because it’s affecting everyone. Our main message of the moment is solidarity, unity and we’re coming together to show that.”

They were “calling on all politicians to have a pro-active agenda. We don’t want this to be a reactive thing anymore. We want to eliminate the possibilities of it happening here and to take preventative measures,” said Rosie Aljohmani.

Anyone who is not able to attend the demonstration can express support via #iwillwatchforyou. Calling All Allies can be found on Facebook, on Instagram and at the email address, callingallallies@gmail.com.