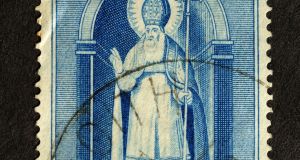 Patrick, a victim of slavers, returned to offer something positive to those who harmed him

The arrival of Saint Patrick in 432 transfigured the society of this island. His legend is the story of a slave who transformed to a friend. His challenge is to translate him in the 21st century.

Because of the visibility of the action, we mistakenly equate the level of faith with the level of church attendance. At present, those levels are low and that is taken as an indication that the message of Jesus is not translating into our time, although that is untrue.

Seventeen centuries ago Patrick translated these values for us. He believed the message of Christ could transform us, and he knew that that transformation could transfigure us and that transfiguration is always a work in progress.

Fundamental Christianity is pro-human. The inspiration we draw from loving your neighbour, being kind to the disadvantaged, forgiving mistakes and defending the innocent is so fundamentally human that it can translate easily into any culture.

Treating others as you would like them to treat you is a philosophy that comes naturally. All of us want other people to treat us well but a person needs to transform the translation to do the first part, treating others well.

Patrick, victim of slavers, returned to offer something positive to those who harmed him, and he personally transformed the translation in the choice that he made to come back. Jesus taught us to turn the other cheek, promoted gentle correction of wrongdoers, and Patrick did exactly that. The greatest sermon Patrick preached was his decision to return and, unlike his compatriots, he did not bring a sword. Enslaving an imperial citizen usually brought bloody retribution on the lesser nation, and it still does, but Patrick took a transformed attitude and chose mercy ahead of justice.

A choice like that is a challenge to higher intelligence that brings us beyond the stark “wrong versus right” choices we face. There are also the “good versus better” and the “acceptable versus noble” choices we often have to consider.

The person who has transformed will prefer the noble, better and right options when making choices. Collectively we make laws that limit the lower end of these choices, aspiring to the noble standards is a matter that must be personal. Law defines crimes of violence, racism, sexism, elitism, vengefulness and exploitation, and these crimes are also sins.

Many actions that are not bad enough to be crimes are still sins; choosing a lifestyle that tries to avoid sin is the mark of a person who gives more than lip-service to the Gospel.

The story of Saint Patrick is a challenge to every individual to transform the translation, and lots of people rise to that challenge.

If enough people rise to the challenge it would transfigure the world, making it a better place for everybody. The bigger barrier that transfiguration faces is hypocrisy, individually or collectively. The “what would Jesus do?” amulets should excite us with the challenge to nobility; the answers to what Jesus would do are found in the message Patrick preached. He would turn the other cheek, he would not condemn, he would forgive from the heart, he would heal, he would encourage conversion and he would leave nobody behind. Packed pews are not a reliable measure of faith in society; our experience of how transfigured it is by kindness would give us a far more accurate picture. Féile Phádraig maith agaibh uile.