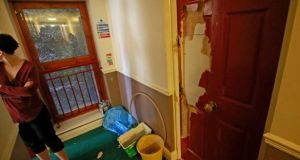 The tenants, who are from France, Germany, Brazil and the United States, refused to meet the demand for increased rent in November and landlord Paul Howard changed the locks and cut off electricity to the apartment. Photograph: Nick Bradshaw

The rental-market regulator is seeking sworn statements from tenants who were forcibly removed from an apartment in Dublin city centre before it can take legal action against their landlord.

The Residential Tenancies Board (RTB) were in contact with the five tenants shortly after they were forced out of their rented apartment in a north inner-city building on Mountjoy Square.

Landlord Paul Howard and a number of men allegedly smashed the door to the apartment at about 10am on Sunday morning and entered the bedrooms where the young people were sleeping.

The occupants, who are all in their 20s, allege that they were assaulted during the incident and locked out of the apartment dressed in night clothes without shoes or other belongings.

The RTB obtained an injunction in the Circuit Court on December 20th prohibiting Mr Howard from entering the Mountjoy Square apartment until the conclusion of an appeals process in a dispute over his bid to increase the rent beyond the 4 per cent limit in a designated rent pressure zone.

The tenants, who are from France, Germany, Brazil and the United States, refused to meet the demand for increased rent in November and Mr Howard changed the locks and cut off electricity to the apartment.

Three of the tenants - Verena Lauer, Rejane Radthe and Madigan Johnson - made complaints to the RTB challenging the rent increase.

The board heard the case earlier this month and the tenants received a monetary award, but the dispute resolution process is continuing and all parties have 10 days in which to appeal the decision.

There is scope for the RTB to take action against the landlord over the latest eviction at the property, but the tenants must provide sworn statements about what happened to them first.

A spokesman for the board, which regulates landlord-tenant disputes in the rental market, said that it “takes the matter of illegal evictions very seriously”.

“The RTB are aware of the current situation and were in contact with the tenants yesterday,” he said.

“Following this initial contact we are waiting now for the tenants to engage formally with us before we can take this matter further as the RTB will need evidence (via affidavits and/or other supporting material) to pursue this matter.”

The board pointed to the court order saying that the tenants are allowed “peaceful occupation of the dwelling until such time as the dispute has been determined by the RTB”.

The tenants called An Garda Siochána after the door of the apartment was smashed in. A number of injuries, including bruised ribs, red marks around the neck, a bruised forehead and small cuts on the hands and forearms, were visible on the bodies of three of the five people in the apartment.

Gardaí from Mountjoy Garda station were at the scene of the civil dispute from 10am until 1pm on Sunday. Although no arrests were made, the Garda said that “any matters or reported allegations arising from the incident will be fully and thoroughly investigated”.

The tenants’ solicitor Gary Daly was taking instructions on Sunday as to whether to have Mr Howard removed from the apartment and to have his arrest sought on the foot of the December court injunction.