Doherty families, who have been on the site at Balgaddy, Clondalkin since late 2018, have been ordered by the High Court to leave by January 15th 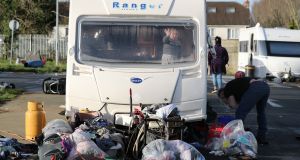 Traveller families in Clondalkin who have been living on an unauthorised site in Balgaddy have been ordered to leave. Photograph: Nick Bradshaw / The Irish Times

Four Traveller families, including 12 children, say they will not leave a vacant site in west Dublin this week as they have “nowhere to go”.

The Doherty families, who have been on the site at Balgaddy, Clondalkin since late 2018, have been ordered by the High Court to leave by January 15th.

There were among a larger group who moved on to the site, owned by South Dublin County Council (SDCC), in November 2018.

Some had left a Dublin City Council-run Traveller site in Coolock due to overcrowding and disputes with other families, while others had come from unauthorised sites in Co Clare.

The council moved to evict the families in January 2019, saying it had no duty of care to them as they were not from the council area. The families, however, said they had family connections to Clondalkin and their children were enrolled in local schools.

Following a stand-off between the council and the families and their supporters, including a number of councillors and the Clondalkin Traveller Development Group (CTDG), the eviction plans were postponed.

The matter was before the High Court several times last year, most recently on November 18th when an order was made that the families leave “on or before the January 15th 2020”.

Among the 12 children on the site is a baby girl, born in a caravan on the site, on January 4th. Her parents, Anthony and Sandra Doherty, have four other children aged between four and 14.

There is neither electricity nor toilet facilities. A hose provides running water. Bags of rubbish are piled high as there is no refuse collection.

Local residents have complained to the council about rubbish being burnt on-site. The families say they try to keep rubbish-burning to a minimum but add it is their only way of getting rid of it as they cannot afford the dump.

Anthony’s brother, Martin, his wife Shirley and their six youngest children, aged two to 15, live between two caravans. Their two eldest sons and their wives live in two others.

Martin Doherty said the family use toilets in the local garage and wash at a gym in Clondalkin.

‘A tap and electricity’

“It is a tough life, but we’re Travellers. We are used to it but in this day and age we shouldn’t have to be. We don’t want Dallas. We just want a bit of a hard stand where we can move on to, a tap and electricity.”

Asked whether they would leave on Wednesday, he said they can’t. “We would 100 per cent leave if we had somewhere to go,” said Martin Doherty. “But we have nowhere. We’re not tearing our children out of school again. We’ll have to stay in the area.”

Four families, the McDonaghs, moved from the site on December 21st to a largely vacant, council-owned emergency site at nearby Lynch’s Lane, though without council permission. Among them are seven children aged three weeks to 16 years.

On January 6th, they were served with an eviction notice by the council, telling them to “remove” their caravans “to at least a distance of one mile from all Traveller specific development located within the ... council administrative area within one day of the date of service of this notice”.

In its Traveller Accommodation Programme 2019-2024, the council said emergency bays are “for Traveller families who are indigenous to South Dublin County”.

The site is dilapidated and was, says Patrick McDonagh, “filthy and full of rubbish” when they moved there. He says they cleared the rubbish and have power-hosed the surface. There is cold running water but no electricity. Mr McDonagh says he would “gladly pay rent” if they could stay.

An SDCC spokeswoman said: “The families concerned agreed to vacate the old school site, Balgaddy on or before the 15th January 2020 and a court order is now in place to that effect...the council’s expectation is that the families will make appropriate arrangements to comply with their agreement.”

Of the €13 million allocated by the Department of Housing for Traveller accommodation last year, by November just €4.08 million had been spent by local authorities.

Between 2016 and 2018, the number of Traveller families living in unauthorised site increased from 536 to 591.