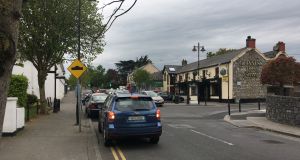 Saggart doesn’t feel much like a boomtown. In the middle of the village, a large stretch of wasteland surrounded by metal fencing has been awaiting development for the past 10 years. But there’s plenty of evidence of growth too. There’s a brand new Insomnia, a Bubble Nails and a Dunnes Stores. The traffic down the main street is incessant. You could be anywhere, although the bright-yellow gorse on the hills above is a reminder that we’re on the edge of the Dublin mountains as well as on the edge of Dublin city.

Most of the people on the street and in the local barbershop agree it’s a quiet place, although in Jacob’s, which still has the feel of an old country pub, John Gannon says the roads have got a lot busier in recent years. “When I came here first there was only a car going down the road every half hour or so,” he says.

For two censuses in a row, this village, ringed by housing estates on the border of Dublin and Kildare, has been pronounced Ireland’s fastest-growing town by the Central Statistics Office, with its population increasing by 46.1 per cent between 2011 and 2016. There are now 3,133 people living there. Approaching from the traffic-clogged Naas Road, you pass one of the reasons; the massive CityWest Hotel complex built by developer Jim Mansfield in the 1990s is the single biggest provider of employment in the area. “Jim Mansfield made the town,” says Noeleen Lacey, who’s lived here for the past 20 years, but still counts herself as a blow-in.

There are other factors too – the upgrading of the nearby Red Cow roundabout and of the M50 as a whole have made this a more attractive residential area for commuters working anywhere along Dublin’s orbital exurbs, as does the fact that this is the last stop on the Luas Red Line.

Saggart hasn’t quite lost touch with its roots. Farmers still come down from Brittas to shop in Dunnes Stores, and the local accent hasn’t lost its Wicklow influences. “But when I was a kid there was nothing around here,” says lifelong resident Martin Boggans, gesturing at the modern development across the road. “See all that. I used to make bales of hay there.”