'Are we just going to end up homeless every year?'

Mother-of-three Amanda Barnes faces becoming homeless again after the apartment she was renting was put up for sale. Barnes has struggled to find new accommodation within her HAP allowance. 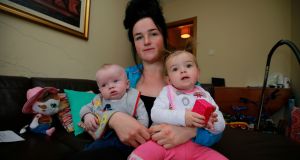 Amanda Barnes (23), a mother of three children, had been living in homeless accommodation for three months when she found her family’s current home – a one-bedroom apartment in Sallynoggin, Co Dublin – a year ago.

She had become homeless following the breakdown of a relationship.

Despite securing a tenancy in the private-rented apartment with the support of the HAP (Housing Assistance Payment), she is now facing homelessness again.

“When I was in the hostel, the council told me I’d have to get a HAP,” Amanda says.

“HAP was the only way out of homelessness, they said. They said it was a long-term housing solution.”

On HAP, she pays a differential rent of €37 per week to Dún Laoghaire-Rathdown County Council, which in turn pays the landlord €1,300 per month.

In return, the family shares a small living area, bathroom, galley kitchen and a bedroom.

Amanda shares a bed with Charlie (3) and Luca (four months), while Milly (17 months) sleeps in a cot.

“It is small but it was a stable roof over our heads. I thought: ‘We’ll never be homeless again.’”

However, on April 6th, she was given notice to quit the property. Her landlord is selling the apartment and wants the family out by June 7th.

“I went down to the council and I asked what would I do. They said to start looking for somewhere else.

“It was up to me to find somewhere and to present myself as homeless on June 7th if I haven’t found anywhere.”

By taking the HAP tenancy, she lost her place on the social housing waiting list, which she had been on for four years.

“I only found that out when I went down to the council. I’ve to apply to go on a transfer list, but if I had known I was going to lose my place on the list I don’t think I would have signed a lease here.”

Asked if she has been looking for alternative accommodation, she says she has been searching since September, given the overcrowded conditions in her current apartment.

“Long-term, really I need a three-bed place. Most places around here are about €2,400 a month.

“Then almost all the landlords say they won’t take HAP when you call them, and want professional job references, which I can’t give.

“I’m really worried about being placed in emergency accommodation again. I don’t know if I could cope. I am still on medication for post-natal depression.

“Charlie is in pre-school near here. If we are put in a hotel in town he’ll have to miss out on that. He’s picking up on my stress.

“I just want a home to be able to bring up my kids. This HAP is just a vicious circle. Are we just going to end up homeless every year?”

Dún Laoghaire-Rathdown councillor Hugh Lewis, who is advocating for Amanda, said he knew of other cases where households on HAP were facing homelessness.

Mr Lewis said: “This is only going to increase.

“The private-rented sector is no substitute for publicly-built homes.”

A spokesman for the Department of Housing said HAP rent caps were higher than under rent supplement, and recipients can take up work.

He said the scheme was supporting 21,000 households.

Norma Foley: Maximum number of college places will be made available 09:09
Majority of Ireland’s barristers ‘facing huge drop in income’ during pandemic 08:32
Covid-19: College students on a break and middle-aged people in rural pub linked to large clusters 07:26
Pharmacists to be allowed give flu jab in homes and cars 07:07
Calls on domestic violence to free legal advice centres ‘rise almost a quarter’ in 2019 07:06