Catholic preacher promotes chastity among teenagers, was to speak at schools, churches 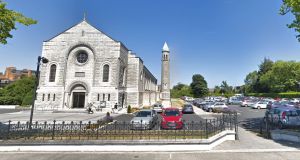 Jason Evert had been due to speak at Our Lady Queen of Peace Church on Merrion Road in Dublin. Photograph: Google Maps

The remaining speaking engagements in a short tour of Ireland by controversial Catholic preacher, Jason Evert, were cancelled on Tuesday “due to illness”.

The US evangelist had been scheduled to speak at a number of events over the next few days including one at the only Catholic parish in Dublin run by priests from the conservative Opus Dei congregation.

Our Lady Queen of Peace Church on Merrion Road in Dublin confirmed on Tuesday evening that a planned talk by Mr Evert in the church on Wednesday evening was not going ahead as Mr Evert was unable to travel to Ireland “due to illness”.

“As a consequence all appearances, including ours, are now cancelled,” a statement on the church’s website said.

It added: “We were all looking forward to hearing him speak. Perhaps we’ll get a chance in the future.”

Mr Evert is the founder of the Chastity Project, which promotes chastity among teenagers. He has described homosexuality and the use of contraception as “disordered.”

Mr Evert was also due to give an address to the Holy Family Mission in Waterford on Thursday, which was organised by the Diocese of Waterford and Lismore, whose bishop, Phonsie Cullinan is understood to be the only member of the Irish hierarchy who is a member of Opus Dei.

Mr Evert was also scheduled to make an informal visit to Rockbrook Park School in Rathfarnham between his official events.

The website of the secondary boys school, which has affiliations with Opus Dei, described Mr Evert as a “popular Catholic speaker” who was known for his “compassionate, down-to-earth and thought-provoking approach to speaking about relationships and chastity to teens and young adults.”

Last weekend, it was announced that several speaking engagements by Mr Evert had been cancelled after concerns had been raised about his views on homosexuality and contraception.

They included planned talks to students in Blackrock College and Rosemont secondary school in Sandyford and a public meeting in the Tower Hotel in Waterford.

UCD also cancelled a planned appearance by Mr Evert at the “Incite 2020” student retreat in Belfield, which is running between Thursday and Saturday.

It followed calls by the university’s LGBT Society for UCD authorities to stop the preacher from speaking at the event because his words put the safety of LGBTQ+ students at risk.