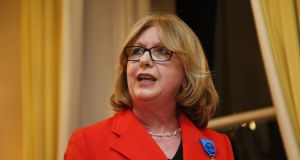 Former president Mary McAleese says Pope Francis has prompted debate within the church but has not been the ‘great reformer’ many expected. File photograph: Nick Bradshaw

Former president Mary McAleese has said she does not believe Pope Francis is the “great reformer” many expected when he became pontiff in 2013.

“I think the man was very unfortunate that when he came into office after Benedict there were a lot of expectations that the church needed a reformer,” she said.

Speaking on Friday’s Late Late Show, Ms McAleese said he had, however, managed to stir debate in the church which was needed.

She said that given that movement in the church is quite “glacial”, she does not yet know if Pope Francis has made any progress in terms of reform.

Ms McAleese has attracted attention for her criticism of the church in the past. In a speech in 2018 she said the institution was a global carrier for “the toxic virus of misogyny”.

“It’s leadership has never sought a cure for that virus though the cure is freely available. It’s name is equality.”

On Friday’s Late Late Show, Ms McAleese said the church continued to suffer in that regard.